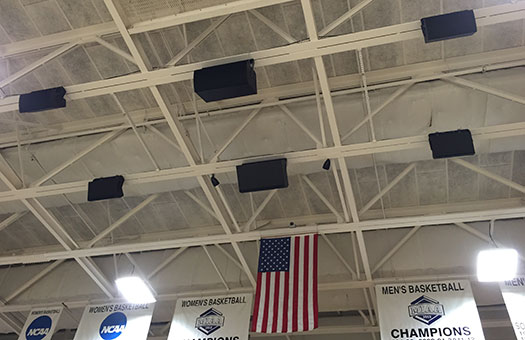 Home to the Washburn University Ichabods men’s and women’s basketball teams, and women’s volleyball team, Lee Arena is a 4,150-seat indoor sports venue that draws some of the largest crowds in NCAA Division II. Lee Arena was the first in the Mid-America Intercollegiate Athletics Association to have a video scoreboard and a digital scorer’s table and, in 2015, it received a new, high-performance audio system.

Sound Products, of Topeka, KS provided the new audio system. The company had upgraded Lee Arena’s audio in 2001 and the university told them, “Now, we’d like you to take us up to the big time.” Lee Arena hosts graduations and other non-sporting events along with its basketball and volleyball games and it can be set up with a stage in the arena’s centre or at end court. To support this wide variety of configurations, Sound Products’ Monty Ehrlich chose a distributed system design for the arena using Community’s I SERIES loudspeakers.

Ehrlich used an Ashly Protea DSP to implement push-button presets for each of the arena’s different configurations. Each preset adjusts the delay and level on different loudspeaker zones to optimise the system for a particular event type. He added Community D5 ceiling loudspeakers in the Ichabod Room which is used for victory celebrations and press conferences. The system is powered by a combination of Ashly and Crown amplifiers and includes a Roland digital mixer which also has presets for different event types.

Shure announce microphones are used in the sound booth for volleyball games and at courtside for basketball and the arena has a variety of wired and wireless microphones for non-sporting events. The mixer includes inputs for audio from the scoreboard and from a Denon solid state music player.

Lee Arena’s new system was completed in July of 2015 in time for the university’s volleyball season and an annual ‘Coaches Athletic Dinner’ in August. Ehrlich said that, after this event, an alumni booster told the Athletic Director, “this is always a wonderful event but it’s never been like this.” And, the university’s Facility Director concluced: “It sounds like a concert in here.”