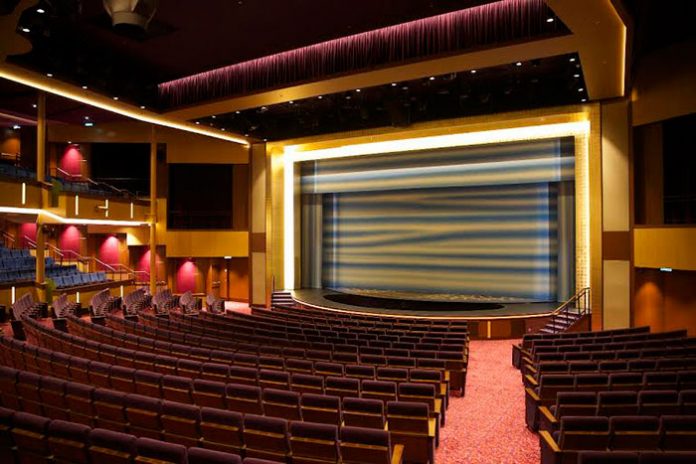 Lawo’s VSM Broadcast Control System is heavily used as part of the TV and entertainment system on board of the cruise ship “Ovation of the Seas”. US shipping company Royal Caribbean International is currently building this third member of its Quantum Class vessels at Meyer Werft shipyard in Germany. On board, VSM is used as the overall control system for the vessel’s own TV system with 36 IPTV channels as well as routing of all cameras of the entertainment areas, like musical theatres or night-clubs.

The Finnish systems integrator TV Tools Oy is responsible for the implementation. It is common to all Quantum Class ships that all TV signals on board are processed in HD quality. As an independent control system, VSM easily integrates with all relevant technology on the ship in order to produce, route and transmit the TV-Signals as well as providing material in the theatres for use as footage in theatre productions. The heart of the system is a Riedel MediorNet signal routing system with 27 nodes. There are on board entertainment systems across the entire ship, and depending on which event is active, the cameras of the relevant area are routed via Mediornet to the Broadcast Control Room. Here, the content is produced and distributed via Mediornet to large screens and various internal distribution channels and recording servers for later redistribution. The BCC has access to all on board production systems and allows operators to work on two different productions simultaneously.

The VSM system controls a wide array of equipment, including all Riedel hardware, the video router, multiviewers, audio router, signal processing equipment by Evertz and the AJA KiPro Rack recorders. All signals on board of the ship are processed in the Broadcast Control Center. The main routing system within the BCC is an Evertz 128 x 128 HDSDI routing matrix. A Lawo crystal console in the BCC, connected via MADI to the Mediornet, has access to any audio signal in the whole shipwide broadcast Mediornet network. In case of an emergency VSM can mute all speakers across the ship so that people can hear the PA system with important messages. With VSM, any source from within the entire ship is routed to any destination on the ship because of very sophisticated routing and Tieline management performed between Mediornet nodes and the Evertz router. To the operators, it is just as if they have one single, flat router.

Additionally VSM is used closely with Coolux show control systems creating the playlist for shows in the ‘Two70’ called two major theatres at the rear of the ship with a 270° view of the ocean behind the stage, and the Royal Theater, a huge theatre located in the front of the ship. Coolux connects to vsmStudio and the two systems collaborate to trigger various events like turning projectors on and off, dropping and lifting screens, recalling presets on scan converters and turning on and off LCD televisions and projectors at the end of shows. All of these positions have their own touchscreen TTP panels to control their local area.

vsmGadgetServer is also used as a standalone converter for Coolux, who have implemented Ember+ natively into their system and control third party devices, using vsmGadgetServer as a Further deployment of VSM includes the Music Hall for live music shows, where the system is used to route the required signals. Facilities above the Royal Esplanade shopping area host a DJ Booth. From there the DJ also has screens and projectors where he can route events from anywhere on the ship onto the local screens. vsmStudio is also controlling various recording/playback devices throughout the ship and in case of an emergency at sea, vsmStudio can also ’muster‘ people by routing a safety instruction video to relevant projectors, dropping the screens and ensuring that the projectors are turned on.

Ovation of the Seas is currently being built in Germany and will start for its maiden voyage in April 2016.