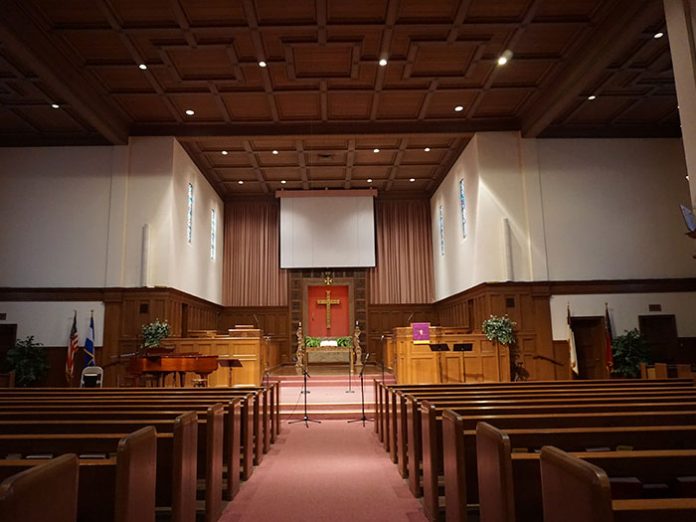 A new Renkus-Heinz Iconyx Gen5 sound system designed and installed by systems integrator Ireland Sound Systems of Upland, California has been fitted at the First Baptist Church of Redlands.

Founded in 1887, First Baptist Church of Redlands has served the Inland Empire region of Southern California for more than 125 years. The church’s current home, built in 1952, is a beautiful Spanish-style building housing a sizeable 480 seat sanctuary. The room’s classic architecture creates problematic acoustics, however, and the congregation had struggled for years with poor intelligibility, exacerbated by an outdated centre cluster sound system.

“The biggest requirement was superior intelligibility for spoken word,” recalled Patrick Ireland, owner of Ireland Sound Systems. “However, the congregation also has a praise band that plays at services, as well as a choir and an organ. The Iconyx Gen5 system was a clear choice because it handles both speech and music extremely well, and it has plenty of power for the praise band.”

The layout of the sanctuary was a major consideration in choosing Iconyx Gen5. “The room is like so many churches of this era, and covering that kind of space with a conventional system is very challenging – consistent coverage to every seat is difficult to achieve, and getting a system to convey natural sound is problematic,” said Patrick. “But with Iconyx beam steering and the added flexibility of the new Gen5 series, we didn’t have to compromise.”

Iconyx Gen5 is the fifth generation of digitally steered array technology from steerable sound pioneers Renkus-Heinz, offering a wider selection of configurations and even more precision than ever before. For the main front-of-house system, Patrick chose a pair of Iconyx IC16-RN digitally steerable line arrays, flown about 11 feet above the floor to the left and right of the stage. The IC16-RN is a powered, coaxial system that employs 16 low-frequency transducers, each with three tweeters, in a slim, low profile design.

“One of the biggest reasons I chose the Iconyx Gen5 was the precise coverage,” Patrick explained. “The choir stands with the main loudspeakers just to their right and behind them, which I expected to be an issue. There was no way around placing the speakers there, but with the Iconyx beam steering, we had no feedback issues at all, which is amazing.” The low profile design of the Iconyx was an aesthetic benefit as well. “We had the enclosures custom-painted to match the decor, which turned out really nice,” he added.

Patrick considered steering a beam from the IC16-RNs to cover the balcony as well, but ultimately elected to dedicate the front-of-house system to the main floor seating. To cover the balcony, he installed a pair of Renkus-Heinz CFX61 two-way loudspeakers. With a 150° x 60° coverage pattern, the CFX61’s complex conic design provides constant beam width and better pattern control over a wider frequency band than conventional horns. “We had the sound person keep the volume down on the balcony speakers so people could also hear some signal from the mains, and the combination worked very well,” noted Patrick.

A pair of CFX81 two-way systems handles monitors. The loudspeakers are flown around 12 feet above the floor and just in back of the transept wall, where the transept joins the main sanctuary. The congregation can’t see the monitors, but they’re well aimed for the choir. “Flying the monitors high and firing at the front platform could have been a problem,” Patrick admitted, “but the CFX boxes have a nice tight pattern, and it came together really well.”

“The church’s sound guy loves it, and he told us that members of the congregation were complimenting him on how great it sounded, which is very unusual,” concluded Patrick. “At last, they can hear everything clearly, and they’re really happy. I’m as impressed as they are. These Iconyx Gen5s are amazing!”