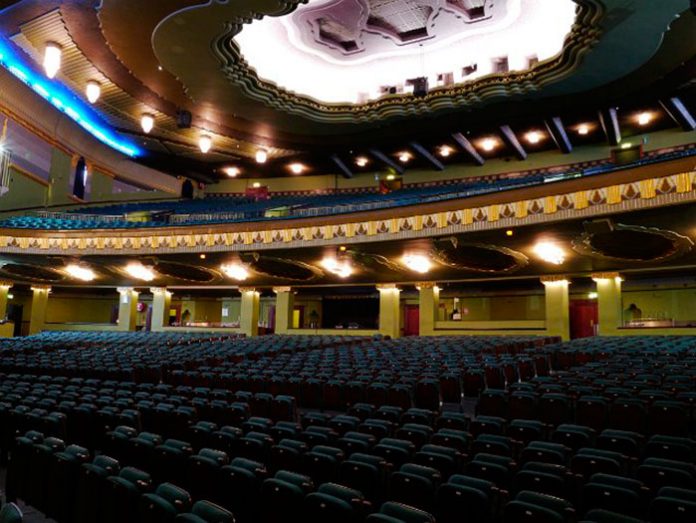 One of London’s most iconic live entertainment venues, the Eventim Apollo, embarked on a major restoration project last year, completely renovating the building and, in the process, revealing a beautiful art deco interior. This was a significant undertaking both in time and financial investment and owners Eventim and AEG Live wanted the venue to not only look good, but to sound good. To this end, at the beginning of 2015 a substantial L-Acoustics system was installed, significantly raising its audio bar.

“The purpose of installing an in-house PA system in the Apollo was to ensure that our visitors are given the highest possible quality audio reinforcement uniformly throughout the venue, make working in the venue safer and reduce the visual impact of the audio system,” explained Alastair Parley, Technical Manager for the venue.

The first stage of the project was for the team to analyse the make and supplier of audio systems for all events over the previous three years. At the end of the process, it was clear that the most popular system used in the majority of events was L-Acoustics.

“The next stage was to identify suppliers of the system,” said Alastair. “All were approached, but we chose to work with SSE Audio. They’re an L-Acoustics main UK agent, which allowed us to have the best possible design team, including L-Acoustics’ own engineers and designers.”

In consultation with L-Acoustics, SSE and several major UK audio hire companies, event producers, promoters and regular clients, it was decided the best possible system would be based around the new K2 line array system.

SSE built a range of customised items from its manufacturing arm in Redditch, all designed to specific parameters to optimise the system performance including custom hanging frames and cabling interfaces. Additionally, the SSE Electronics manufacturing department designed and built a motor control system; one for the main PA hangs and a secondary system for the house delays on the balcony, with controls designed so they could plug in to logical positioned control points – on the wall of the balcony, for example – making flying as safe and efficient as possible.

The main PA comprises 12 K2 per side, hung from newly installed points, which are positioned further out from the stage than the previous points, to achieve a wider stereo image and less intrusion into the stage space, which has the added benefit of improved sight lines. Six SB28 subs sit either side of the stage, with four ARCS WiFo cabinets positioned on top of the inner subs, using custom manufactured mounting panels to provide 120 degrees of near field coverage. An additional five 8XT cabinets are sited along the front of the stage as part of the near field coverage.

Under balcony coverage was an area of particular concern, having often been neglected despite it being the location of the front of house mix position. Here, SSE installed five ARCs WiFo cabinets using a custom-built suspension bracket designed by them to assist the horizontal and vertical positioning of the units. “The special bracket made for quick and easy installation, whilst ensuring the WiFo cabinets are fixed as close to the ceiling as possible, which minimises interference with sightlines,” said SSE Managing Director, John Penn. “The units have also been colour matched to the surrounding decor.

“We chose WiFo because of its physical profile and its acoustic qualities. Since these deliver sound to seats that include the FOH position, it’s important that the mix engineer hears the same tonal quality as from the main PA. The WiFo uses the same 12-inch driver and HF driver as K2 and the HF driver is mounted on a DOSC waveguide, the same as K2. Tonally it’s as close as it’s possible to get to the main PA.

“We also set up the system network management with a mute button for the centre WiFo cabinet, so the FOH engineer can easily hear and compare the difference between the main PA and the WiFo and check coverage.”

For the balcony, L-Acoustics Kara cabinets are positioned left, centre and right. “The existing ‘delay’ flying points were too near to the front of the balcony, both from an acoustic point of view and also for ease of servicing,” continued John. “The new balcony points we specified were designed for optimal acoustic performance further back from the main system, enabling improved coverage to the back of the balcony seating, whilst being more acoustically transparent with the main. Their position also means the delays can be dropped onto the balcony itself for servicing.”

Finally, in the foyer, four 8XT speakers are mounted on the wall, with a further eight 8XT speakers installed in the bar. This can be used simply to relay the main PA. An additional microphone point has been installed in the upstairs bar for announcements and other remote points in the bar can accommodate an independent audio system for such things as after show parties.

Once again, the speakers are colour matched to the walls and a custom mounting bracket has been designed for speedy deployment and easy angle fixing.

The system is amplified by L-Acoustics LA8 amplified controller, with a PC running LA Network Manager software and a Wi-Fi link allowing remote operation from anywhere in the auditorium.

The installation took place during January this year and was first used on for an event on First Aid Kit’s concert on 26 January. Since then it has been used for most events held at the Apollo, to great acclaim both from customers and visiting productions.

“There are many bespoke and custom designed components, including an expansive data network over optical, digital and analogue formats connecting all elements of the audio system,” said Alistair. “The network also allows visiting production companies to use the house multicore connections to connect their show control equipment, including light and video control, without having to install their own, which saves time and labour costs.

“The result is a system that delivers an exceptionally high quality of audio reproduction throughout the auditorium over the audio spectrum, with a very high level of intelligibility for the human voice.”