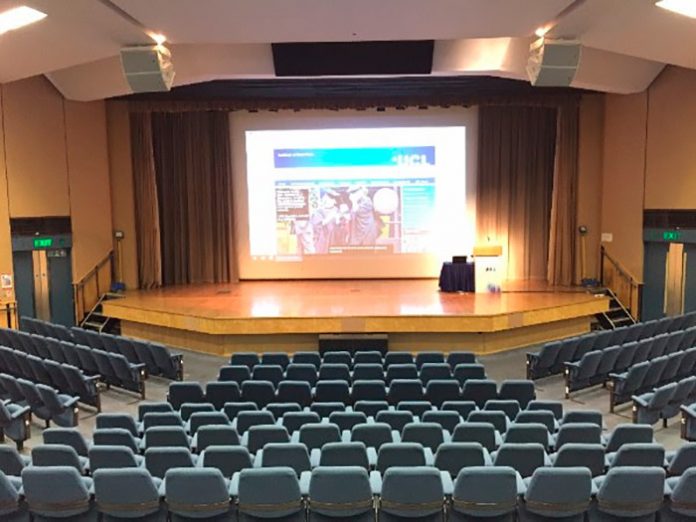 Located in the fashionable London district of Bloomsbury, Logan Hall forms the centrepiece of the UCL Institute of Education’s 20 Bedford Way complex of lecture and function spaces. Famous for its Brutalist architecture, a new L-Acoustics audio system has ensured that the interior audio quality is anything but.

Opened in 1977, the grade 2* listed building, designed by Sir Denys Lasdun, also responsible for other Brutalist landmarks including, the National Theatre and the Royal College of Physicians. The landmark’s architecture has its detractors and defenders, but opinions of Logan Hall’s existing point source sound system were universal.

“The original system was replaced around the time of the millennium, but it always lacked punch. It also relied on cabling from the 1970’s, including a matrix that would confuse the savviest of technicians. For years finances dictated that patching up the old system was the only option so, when funding finally became available, I jumped at the chance to install a new system,” said the venue’s Senior Technician, Dan Gritzman.

Several years ago, Dan had been put in touch with HD Pro Audio’s, Andy Huffer, by Jem Noble, a freelance engineer at the venue. So when the funding became available this year, Dan got back in touch.

“I revisited the site and did a Soundvision model. My gut feeling was that an L-Acoustics system of ARCS WiFo flown horizontally, plus subs and front fills, would be the best option in terms of optimum coverage and fidelity for the budget,” said Andy. “The Soundivision model confirmed my thoughts and helped me work out the best speaker placement, given the physical constraints of the venue.

”The Hall’s audience area has a very wide girth, but not deep, so Andy’s design features a pair of L-Acoustics ARCS Wide per side, offering 90º horizontal and 60º vertical coverage. Placed slightly inboard of the original speaker positions, the wide coverage pattern covers the whole space evenly, apart from the front three rows, which are handled by 8XTi front fills. A floor-mounted pair of SB18i subs was included for additional low frequency reinforcement if required, although the main clusters deliver full range audio, with plenty of low end. A specialist theatrical carpenter cut holes in the front of the stage to flush mount the front fills, with Andy’s team overseeing the manufacture of custom magnetic covers to hide them.

“The ARCS Wide speakers are in white and mounted tight to the ceiling, meaning the whole venue is covered by a very discreet and compact system, all driven from a single LA8 amplifier,” Andy added.

“HD Pro Audio’s quote surpassed all others in terms of value for money and we also wanted a brand that our clients would be happy to work with. With two ARCS per side achieving 90% of the required coverage, the system made complete financial sense. Andy’s confidence in the products also helped to satisfy those in charge of the budget,” said Dan.

The system was installed and commissioned in a single night between events, a testament to its ease of use and out of the box audio quality.

“Andy and his team were awesome. They came up with creative solutions to issues, like the magnetic grilles for the frontfills, and were also incredibly helpful installing the system overnight. It meant we could accommodate our busy schedule of clients without any disruption,” explained Dan.

“I was pleased to note, once again, that if you create an accurate model in Soundvision, the predicted coverage and SPL matches the real-world result very closely,” added Andy. “As with previous projects using a similar specification, a level of audio quality and rider-friendliness has been achieved within a budget that would not traditionally be associated with the L-Acoustics brand.”