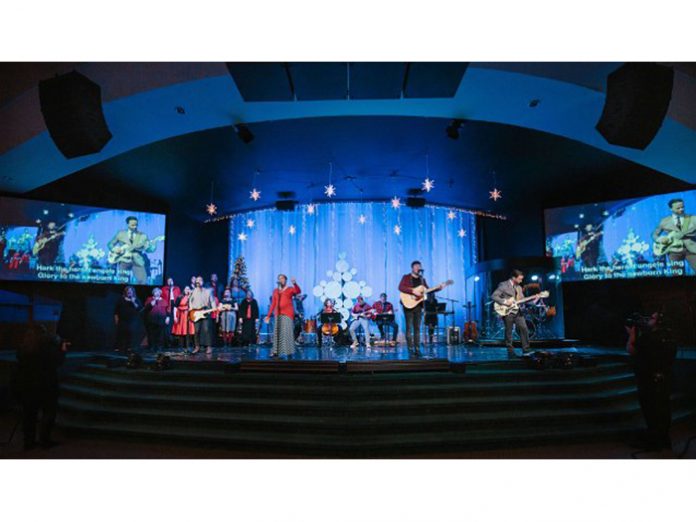 When Lafayette, Indiana’s First Assembly Community Ministries officially rebranded itself as River City Church earlier this year, the name change was accompanied by several other updates, including the segue to a more contemporary, production-oriented worship style. As part of that transition, River City’s sanctuary required a more modern sound system—a need that CCI Solutions was nicely able to fill with a new L-Acoustics ARCS WiFo (ARCS Wide and ARCS Focus) system.

“The old PA was about 20 years old and designed for an era when modern production was not part of the church’s services,” explained Luke Flowers, who has been River City’s production director for the past four years. “Our style has changed a lot and we needed a PA that could keep up with a full, contemporary, rock-band kind of service.”

In HOW installs, one of the biggest challenges—especially in mid-sized rooms—is consistency of both coverage and sound quality, and River City chose a system integration company with a long-standing reputation as a company that “gets it”—Tumwater, Washington-based CCI Solutions.

“As usual, budget drove a lot of the decisions about what gear to use,” said CCI Solutions Project Lead Mike Sessler. “The great thing about the ARCS WiFo system is that we don’t have to compromise in terms of the end audio product, even when the budget would seem to demand compromises.”

The goal for the new system was solid, even and coherent coverage in every seat, top to bottom. Flowers describes the room as fairly sizable: “It’s long and not exactly narrow, but not fan-shaped either,” he said, noting that the previous system consisted of speakers on sticks sitting on the stage. “Our trim height is only 21 feet and we had some screen situations going on, and the other speakers we tried were just in the way.”

“We love ARCS WiFo systems because not only do they sound amazing, and cover consistently, but they are very compact. The constant curvature approach really works well in a room like this where low visual impact is important,” said Mike. “The way the stage is designed, the proscenium is really low, but once you get past that, the room really opens up. Even with the challenges of the room and the trim height and, especially, the budget, ARCS WiFo sounds great. A lot of compact arrays just don’t hold up in a room of this size. They just don’t move enough air.”

The SB18s are also flown, but perhaps not in the way one might initially assume. “We’ve been trying different configurations and have found that hanging SB18s in a horizontal line in the centre is a really good solution for this kind of room. The coverage and pattern control is just great, plus it helped us keep the sight lines clear for lighting and video.”

CCI Solutions Vice President of Sales and Integration Duke DeJong points out that simplicity and consistency are two characteristics that drive CCI to choose L-Acoustics—and specifically ARCS WiFo—time and time again. “Every time we put in an L-Acoustics speakers system, the customer wins and our team loves the results. The ARCS WiFo system especially provides phenomenal value and fantastic sound, and the price for performance can’t be beat.

“The most impressive thing about L-Acoustics is how incredible it sounded right out of the box,” said Luke. “I remember thinking you could almost get away without tuning them after we turned them on for the first time. After we dialed in all the elements in the boxes, they just sounded better and better. The articulation at both high and low SPL remains unchanged, which is a welcome change compared to many other boxes.

“The most common comment I get from members of the congregation is how clear the PA sounds. The clarity of the ARCS WiFo is incredible, but L-Acoustics also delivered in their subs. The coverage and tightness of the SB18s are amazing; a big issue I have with many shows is how messy low end sometimes gets. But the SB18s are ridiculously tight, so much so that we didn’t do anything to them out of the box.”