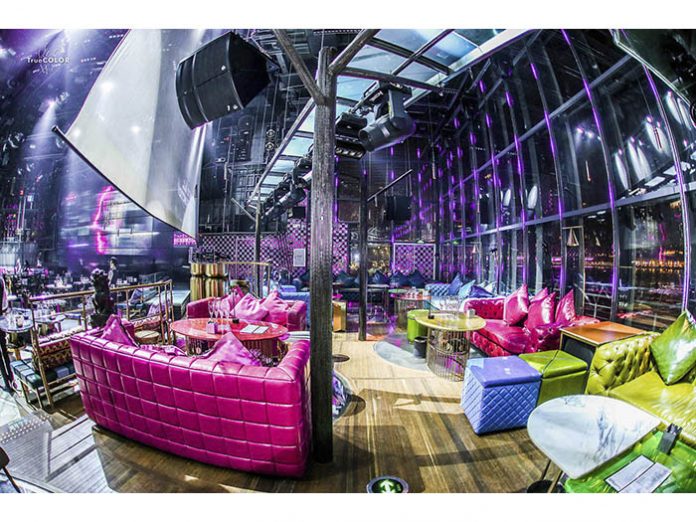 TrueColor is the most popular night club in this thriving Chinese city located on the Zhujiang (Pearl) River in southern China, two hours north of coastal Hong Kong. TrueColor in Guangzhou City is the flagship venue of a chain of clubs created in 1995, currently owned and managed by Alliance Art Group, one of the most famous entertainment groups in China, noted for its uncanny eye for detail in their high-end restaurant and club venues that focus on creating unique and visceral environments. Modern in its design, innovative in its thoughtful delivery of the ultimate club experience, TrueColor Guangzhou City recently sought upgrades to its audio system.

After consultation with trusted colleague Mr. Tan who represents dealer Guangzhou EGG Technologies Company, Alliance Art Group called on DMT – Clair Brothers Chinese distributor – to help make the necessary improvements on behalf of TrueColor customers. Right on the heels of a complete upgrade and redesign of the layout and style of the club in June of 2017, the decision to call on Clair Brothers made total sense.

The TrueColor experience is fresh and exciting, with moving lights and lasers seemingly everywhere, smoke machines, acrobatics, dancing models – even an aquarium with live sharks and occasional models swimming with the sharks. TrueColor is a true spectacle – a nightclub where music plays constantly, seven days a week with a full house, and permeates the entire establishment, so it has to sound awesome and perform reliably. After the redesign of the interior, the old system just didn’t fit the bill.

The sound system needed to have bright high-end, clear mids and plenty of heart-pumping ultra-low bass. The point is to make customers feel comfortable, to get them moving and to make them stay longer. Alliance Art Group went the extra mile searching for the just the right brand to install in their newly designed flagship club. They compared top brands, but once they heard the powerful and unique excellence of the Clair Brothers system, there was no hesitation – the Clair Brothers brand was the unanimous choice.

Guangzhou EGG Technologies Company, in conjunction with DMT did the design, installation and commissioned the project, supplied the gear and gave technical support to Alliance Art Group throughout the install. The main system flanking the large feature video wall is 3x CAT215 per side with CS218 double 18-inch subs under the stage. Additional CS218s are spread through the club, tastefully integrated as cocktail table bases.

The system consists of a range of additional Clair Brothers speakers for distributed coverage including the CAT115, kiTCURVE12, CS18-M, FF2-HX, and kiT12 as bar fills. Two kiTCURVE12s are used as center fill, paired with four kiT12s and two FF2-HXs, which deliver the delay fill. Supporting the new loudspeaker system are Lab.gruppen FP Series amplification, and Lake Controller software for user operation of the system.

TrueColor club owners and staff in Guangzhou City explained their satisfaction in no uncertain terms: “The Clair Brothers system has exceeded all our expectations. The sound, the coverage, the clarity is unbelievable. It feels like a Rolls Royce motor car!” Adding, “Customers are staying longer, business has picked up so much better than before.”

The TrueColor-Guangzhou City installation represents the largest Clair Brothers install in China. It also represents an inarguable raise of the bar for nightclub sound systems in this vast, quickly modernising country. With its success here, Alliance Art Group already plans on using Clair Brothers in another, even bigger club in Beijing.

Clair Brothers is an American, professional sound reinforcement innovator specialising in designing and manufacturing high-quality loudspeaker systems. If you would like more information about this topic, or to schedule an interview with Clair Brothers sales or engineering representative, please call (717) 665-4000 or email claire@claircompanies.com. Additional information can also be found at www.clairbrothers.com.