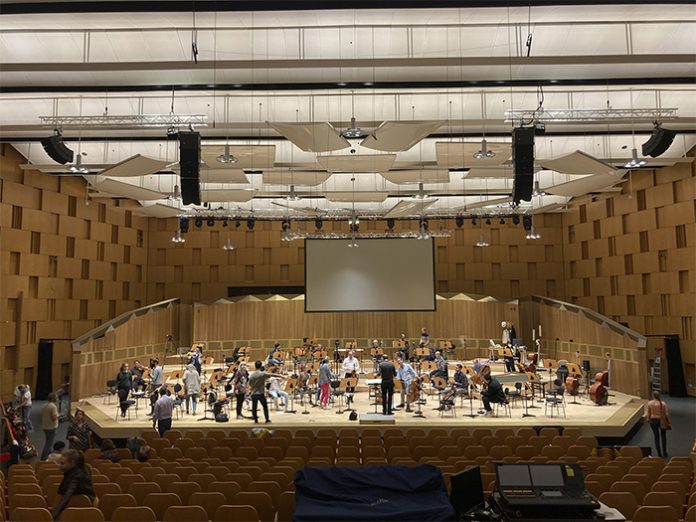 Amongst the beauty of regal parks and palaces, swathes of green and museums, Hanover, the capital city of Lower Saxony, is home to Landesfunkhaus Niedersachsen (State Broadcast Station), one of the region’s most recognised landmarks and part of regional public radio and television broadcaster, Northern German Broadcasting (NDR). Its iconic building is home to Kleiner Sendesaal, a 350-seat hall that plays host to an array of corporate and music events along with the 1,250-capacity Großer Sendesaal, which has been primarily used for the NDR Radiophilharmonie which produces over a hundred concerts each year. This summer, both halls received a major audio upgrade designed around L-Acoustics ultra-compact, powerful Kiva II and flexible A Series.

Both halls host events that span from live music to film concerts with cinema sound, and the existing sound system was not keeping up with the demands for high-quality sound reinforcement. “The ever-increasing sound quality requirements, coupled with the rider requirement of incoming productions led us to look for a new, optimised sound system that can take us into a new era of audio,” explains Ingo Schwarze, music production team leader at Landesfunkhaus Niedersachsen.

Following an assessment of available solutions that fulfilled the team’s strict requirements, two systems were retained and Theapro was commissioned to start the final comparison round. L-Acoustics was the undisputed winner in both technical sound measurement and listening tests. “Apart from the requirement for a distortion-free reproduction of certain acoustic levels such as headroom, the list of key criteria included achieving the most uniform possible coverage of the entire auditorium,” continued Ingo.
“We also needed a system that would eliminate wall reflections, attain high speech intelligibility, and attenuate sound onstage.”

In addition to sound quality considerations, the team was working to architectural requirements. There were clearly defined rigging points with weight limitations, height restrictions for film performances where speaker hangs would need to be clear of the cinema screen, and pre-configured placement of side- and front-fills.

With L-Acoustics confirmed as the system of choice for both halls, L-Acoustics Sales Manager, Sebastian Wittrock, and Martin Rode, Head of Application, Install, began creating the system design. The final configuration for the Großer Sendesaal comprises left / right hangs of seven Kiva II and two SB15m subs in a cardioid arrangement. Three L-Acoustics SB18m subwoofers are positioned as mobile stacks on either side of the stage, whilst five Kiva II are deployed for side fill. For front fill, nine 5XT coaxial loudspeakers are evenly spaced across the stage lip, ensuring fully distributed sound throughout the auditorium. One 5XT per side also serve for outfill. “Kiva II excels in the large hall, where the hexagonal floor plan makes it exceptionally difficult to achieve uniform sound distribution,” Ingo enthused. “Previously, we had major problems with reflections, frequency cancellations and the resulting poor speech intelligibility. With Kiva II, those issues have been noticeably improved,” he concluded.

The Kleiner Sendesaal boasts left / right hangs of one A10 Focus and an A10 Wide. Two mobile stacks of two SB18m subs are positioned left and right, again in cardioid mode. continued Ingo. “A Series was chosen for the small hall as the team wanted a full-range system that could also be highly versatile, since subs can’t be flown or placed there,” explains Wittrock. “A Series Panflex variable directivity gives us the ability to steer dispersion in the horizontal plane, preventing unnecessary reflections from the walls.”

Ingo particularly appreciates the fact that the SB18m subs are mobile. “We can use them in both halls, depending on the sound requirements, which is great for our ROI,” he emphasizes.

The full system implementation was done by Amptown System Company.

“We are really satisfied with the system design for both halls. Our early experiences with the overall sound are extremely positive, especially the low frequency range which, even without using the mobile SB18m subs, is impressive,” he concluded. “We are very much looking forward to the first post-pandemic shows with physical audiences and are confident they appreciate the excellent sonic quality of the new system.”