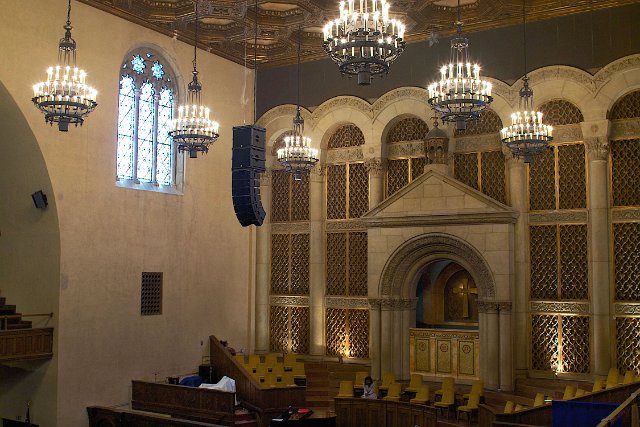 In a world where churches are popping up in spaces that once served as anything from a bank to a department store, First Baptist Church of Los Angeles is a throwback to an earlier time when houses of worship were built to be just that. Until recently, the audio system there was a throwback as well, until the congregation turned to CCI Solutions to design and install a new system centered on Kiva and X Series enclosures from L-Acoustics.

Built in 1927 and modeled on the Palace of Ducal in Italy, the historical landmark is reminiscent of a European cathedral – deep and narrow with soaring 60ft ceilings. And, in addition to services for a number of congregations, it regularly serves as a shooting location for films and TV shows. All of this created a unique audio challenge.

“It’s a cavernous space and really multi-use for a church,” said CCI Solutions’ Duke DeJong.” It is almost like a convention center that the church owns and meets in. The main congregation doesn’t fill the auditorium, but they rent the space out to other larger congregations. So when we took on the job, there were multiple sound systems cobbled together to cover the range of uses. The goal was to have one good, clean system that could handle anything they threw at it. And given the movie and TV uses, it had to be low profile. L-Acoustics’ Kiva fit the bill perfectly.”

Systems from a number of manufacturers were considered, including some noted for high-tech pattern control, but they proved to be the wrong fit in terms of both profile and cost.

“We’ve really fallen in love with L-Acoustics products over the last four or five years,” Duke continued. “They make some really great sounding speakers and they’re both very high-quality and cost-effective, which for church installs is a big issue.”

Another issue HOW installers and crews struggle with is intelligibility. Music is one thing, but in a church, spoken word is the main thing. “All of the L-Acoustics systems we use, including Kiva, have a great warmth-to-articulation ratio. You can’t go into a church environment with a really aggressively voiced system. Spoken word and music have to co-exist without either sounding flabby or harsh, and the Kiva strikes a really nice balance between warmth and articulation.”

Ease of use and installation – especially in a building with such high ceilings – was another important factor but Kiva quickly pleased all. “Installation has the potential to be a monstrous task in a room of this size,” commented Todd Gathany, CCI Solutions’ Project Lead for First Baptist Church of Los Angeles. “Even with the extremely high ceilings and hard-to-reach locations for the fill speakers, rigging the speakers up went very smoothly.”

The system is literally centered on a single center-hung, seven-enclosure Kiva array supplemented by two flown SB15 and SB28 subs on the floor, plus X8 coaxial enclosures filling in a couple of areas that the main array doesn’t effectively reach.

At first, the system’s diminutive size looked like it might prove to be an issue with some of the audiences. “The home congregation was fine, but the others were more skeptical when they saw the size of the array,” Todd recalled. “But you could actually see the attitude change as they began to push the system. They kept asking our people if they could turn it up more until they got it to a point where they said they didn’t want to go any louder for their services. When they were assured that they still had plenty of headroom and the system was not being pushed, they were as sold as we are on Kiva.”