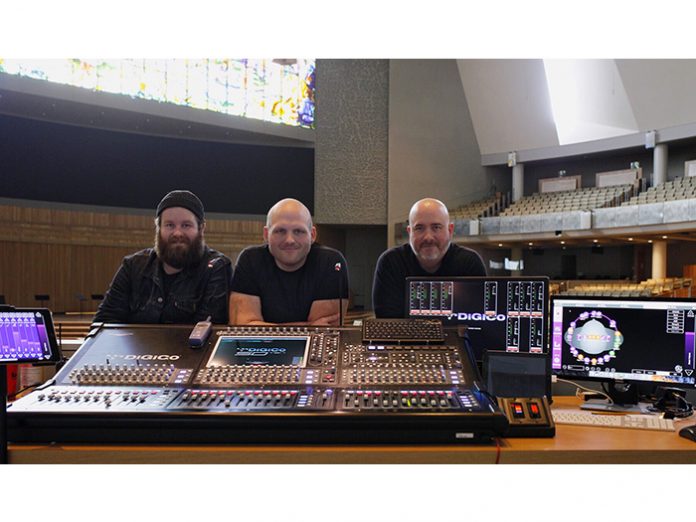 The United Methodist Church of the Resurrection, whose four locations and membership of over 22,000 makes it the largest United Methodist congregation in the country, is also a leader when it comes to technology.

Thus, the choice of two KLANG:fabrik 3D in-ear monitor (IEM) mixing systems from KLANG:technologies for both the church’s new main sanctuary and a second space underscore how KLANG’s unique technology is at the forefront of audio in the house-of-worship sector.

The KLANG systems were purchased through Raytown, Missouri-based Progressive Electronics, Inc. (PEI), which did much of the systems integration for the 3,500-seat main sanctuary at the church’s flagship broadcast location in Leawood, Kansas as well as the renovation of its former sanctuary, which is still under construction but will soon be used as a second worship and event space.

The installation of the first KLANG:fabrik system was installed by the Leawood audio staff—Lead Audio Engineer Tim Higinbotham and Audio Engineers Jordan Tracy and Steven Moduno. Tim stated: “It was clear that this was the direction we wanted to go moving forward, and we will be installing the KLANG system in our newly renovated space as well.”

“It was a great system—for 2005,” Jordan commented, citing issues such as high latency and low channel counts. In the course of installing the DiGiCo SD10 consoles that are now in the new main sanctuary and the newly renovated event space, they were introduced to the KLANG system. “When we realised that the KLANG IEM system can be seamlessly integrated with the SD10 consoles, we realized that this was the way we wanted to go.”

The KLANG:fabrik had plenty to offer beyond that, though. “We’ve had the KLANG systems in place now for about two months and the additional level of control they give us is amazing,” says Higinbotham, citing the 32 channels they now have through the system’s six stereo outputs. “Before, the drummer was limited to his entire kit through one mix; now, he can have a separate channel for each drum,” he explained.

Resurrection runs a combination of both KLANG and wedge mixes from FOH, providing them with a variety of ways to offer monitoring solutions. The church’s varying styles can consist of up ten musicians and vocalists on stage, and as many as 20 choir members, each with a handheld wireless microphone. “The musicians that utilise KLANG can use any device to do that—an iPhone or iPad, even a Kindle Fire,” Jordan said. “With the old system, if a controller broke, it could cost up to $800 to replace it. Now, everyone can use their own device as a controller.”

And, of course, this level of control over the monitor mix means that the church did not have to buy separate monitor consoles for these two spaces. “All we need is a MADI or a Dante connection on one cable, and we have monitors taken care of,” says Higinbotham.

But, at the end of the day, it was all about the sound, for the engineers and the musicians. “It sounds phenomenal,” added Jordan. “We tried it on an evening service the first week after installation, at first as a backup to the old system, and everyone onstage said, ‘Hey, can we have this all the time from now on?’ Everyone loves it for its sound, ease of use and simplicity. The spatial clarity of KLANG’s in-ear mixes is unlike anything we’ve ever experienced and it has changed everything.”