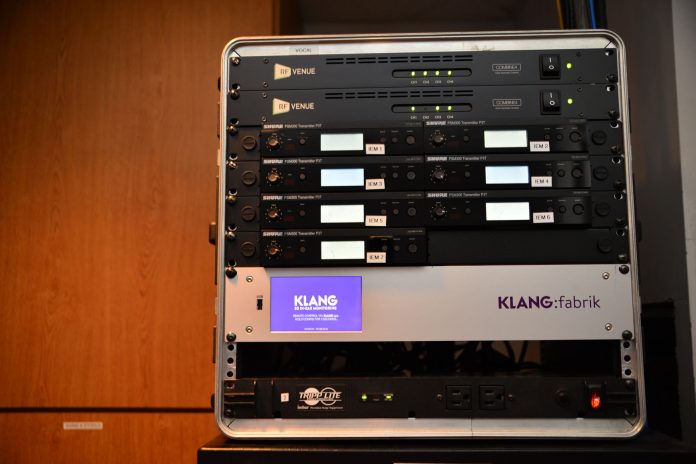 The musicians on the worship team at Florida Hospital Church (FHC) now have a new in-ear monitoring system that might be best described as ‘Out of this world’. This is due to the fact that FHC came onboard earlier this year as one of the first North American houses of worship to install a KLANG:fabrik 3D IEM solution for its praise band.

The addition of the KLANG system, which was sold by AVnew, a local AVL consultant and integrator primarily dedicated to the HOW market came about when the Seventh-day Adventist church’s band members expressed their interest in moving to a wireless monitoring platform. “I first came across KLANG at InfoComm a couple of years ago and was impressed with the technology and its ease of use,” says AVnew’s Gil Parente. “So when the musicians at Florida Hospital Church shared that they didn’t want to limit their mobility by being tethered to their personal mixers, I suggested they look into the KLANG system at the same time that they were adding some more Shure PSM 300s. It’s the ultimate solution to achieve the freedom of being on an wireless IEM system combined with a very intuitive user interface and uniquely immersive 3D environment.”

For FHC Technical Director Chad Hess, the KLANG system offered clear advantages. “The way that you can spatially move instruments around the sound field is very nice,” he says. “In a mono in-ear mix where everything’s on top of each other, it’s hard to pick out your own instrument and a stereo mix is really only marginally better. With the amount of separation that you can achieve in the KLANG each instrument has its own clear identity in a 360° audio field. Also, it’s so simple for band members to be able to just drag where they want their sound to be with a finger on their personal tablets.”

Those tablets, in this case, happen to be a set of inexpensive but effective Amazon Fire devices. “With other in-ear systems requiring a touchscreen, the only option is an iPad which is nice but certainly adds up when you’re talking about eight mixes,” says GIl. “Because KLANG is fully functional and compatible with even $50 tablets it actually makes the cost per mix very competitive with other personal mixing stations ones that don’t offer this amazing, realistic 3D environment that KLANG does.”

Another thing that Chad appreciates is the system’s ability to protect musicians’ hearing and sanity when volume level increases occasionally run rampant. “One of the problems that we previously used to experience was band members turning one thing up, then another and then another until they couldn’t hear anything clearly because everything’s at max and it just sounds terrible,” he laughs. “With the KLANG, if you boost an input all the way and then hit it again, it automatically lowers every other input by that amount which is very simple yet effective solution. It’s little details like that that make this such a great tool.”

Despite the high-tech nature of the system, Chad notes that the setup was remarkably painless, “It was one of the easiest and smoothest installs that we’ve done, which surprised me. We’re Dante-based here, and once we got everything patched over, the KLANG system, the wireless in-ear system and the tablets, it all just worked on the first try. KLANG’s setup screens are extremely intuitive and patching inputs and output was very easy as well.”

With two FHC services held each Sabbath—plus another church denomination renting the space and system for its own services on Sundays—worship music styles and performers in the 530-seat room vary widely from week to week, but everyone using the system is reportedly very pleased. “The musicians love being wireless and really like the KLANG system with its wider feel,” Hess adds. “They’d have to work awfully hard to make a mono mix on this thing; it very intuitively pushes them to make a wider and better mix. And the better the musicians can hear themselves, the better they can play, so the music is better, which makes for a better overall worship experience for everyone.”