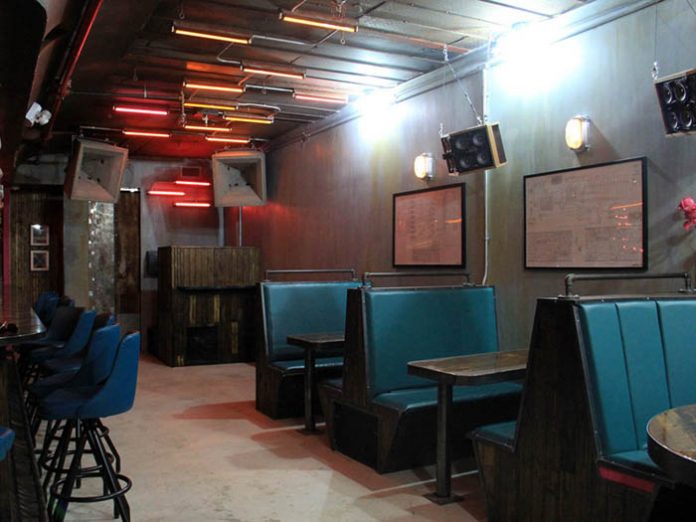 Like a scene from Star Wars or Blade Runner set in the middle of Brooklyn, Jupiter Disco is a refuge for intergalactic bounty hunters, replicants, and thirsty, trendsetting New Yorkers. Celebrated mixologists Maks Pazuniak and Al Sotack opened Jupiter Disco with inspiration drawn from their mutual love of dystopian science fiction. That unmistakable aesthetic combines with a solid foundation of world-class drinks and big, reference-monitor quality sound. Danny Taylor, from House Under Magic, designed the sound system for Jupiter Disco, relying on his long history with Danley Sound Labs’ unique, patented technologies to give the bar impactful, detailed sound with a “grills-off” aesthetic that fits the theme.

“This is Maks and Al’s passion project in a scene filled with taste-makers who are very enthusiastic, but also very critical,” explained Danny. “Sure, they had to put money into it to pull it off, but the real key to Jupiter Disco’s success is their genuine passion. The scent of genuine passion (or its lack) is really picked up on, and you can’t buy your way into it. The drinks and aesthetic are an obvious priority at Jupiter Disco, but the sound system is as well. They wanted to bring in DJs, along with limited live electronic acts in support of a local scene here in Brooklyn. They wanted an awe-inspiring sound system at Jupiter Disco.”

Danny’s experience with Danley goes back many years. He played in and engineered for Collapsing Scenery, orchestrating and overseeing their happy reliance on a pair of Danley SM80 loudspeakers and a pair of Danley TH118 subwoofers for all their live shows (house PAs be damned!). He also works closely with Eastern Stage Productions, which keeps a healthy stock of Danley boxes on hand, citing their hi-fi sound and efficiency (fewer boxes to bring plus quicker setups and strikes, equals happy crews and happy clients). “As great as the Danley technology sounds, I have to say the Danley horn-loaded aesthetic is almost as important as far as my clients are concerned,” Danny said. “They respond to look as much as to sound, and a Danley horn-loaded box with its grill off is an iconic look. Clients get excited.”

Based on their coverage patterns and output, Danny selected a pair of Danley SH60 loudspeakers for the mains at Jupiter Disco. The grills are off and the wood is stained to fit the rest of the bar’s aesthetic. “The Danley SH60s are one of the first things you’ll notice when you walk in,” he said. “It’s a real statement piece, not just a black box. And the coverage is perfect: it’s even across the bar without much spill on the walls and ceiling.” A single Danley TH118 integrated into the DJ booth fills out the low end, with significant additional support from two Danley CS30 subwoofers. A Danley DNA SC48 processor conditions the system, and Powersoft K-Series amplifiers power it. Additional sound reinforcement high points include a custom analogue Condesa rotary mixer and an SSL G Series VCA bus compressor.