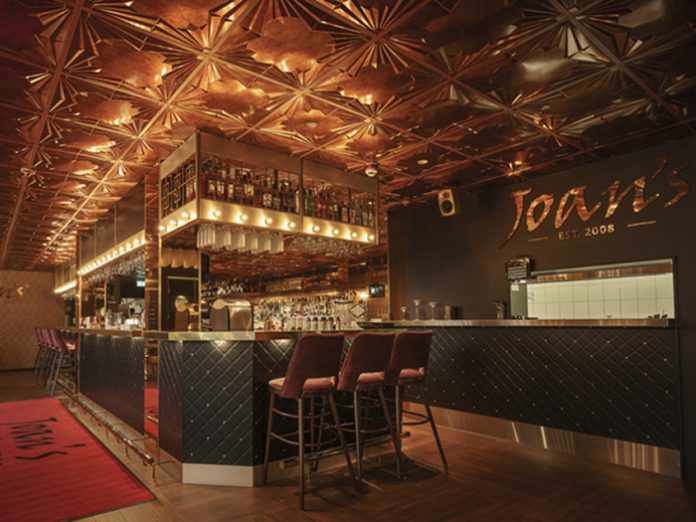 Joan’s Café, named for the founder’s little sister, was first established in 2008 in Vingåker, Södermanland County, Sweden. Since then, the eatery/DJ & live lounge concept has proved so popular that the company has been able to open two further venues in Finspång and Karlskoga. The Finspång franchise recently decided to invest in a high quality sound system from Genelec, complete with lighting and control, in order to enhance the customer experience, whether it be during the day for lunch or an afternoon latte, or for drinks and dinner in the evening followed by live music or a DJ set.

Joan’s Finspång turned to specialist systems integrator, Lefflers AV Partner AB, based in Norrköping to design and install a system that would meet the high standards required by the restaurant as well as be easy for restaurant staff to use. Lefflers AV’s Mattias Björkman explained,

“Joan’s wanted a system that would sound great at low volumes during dinner or drinks with friends, but powerful enough to handle a proper DJ set or small live band without going into overload,” he said. “During dinner you want a full, warm sound albeit at a low, unobtrusive level – there’s nothing worse than having to fight with the sound system in order to carry on a conversation with the rest of the table – but in the evening when the DJ or the band come on, you need to be able to turn it up and still have it sound vibrant and detailed but at much higher levels. Genelec’s 4000 Series installation loudspeakers were the ideal solution for this application.”

Lefflers AV installed a total of eighteen powerful yet compact Genelec 4030C loudspeakers in a zoned, distributed system throughout the restaurant managed by a Control4 control system combined with an audio matrix from Triad. “We opted for the 4030Cs throughout because, although compact, they are sufficiently powerful and develop enough low end that they can be used without a sub, even at high SPLs. This means that they sound great in the restaurant but still work really well if there is a DJ or small band performing. Another advantage is that they are active loudspeakers – in other words, amplification and processing is integrated into each loudspeaker for simple plug-and-play operation, which is ideal for non-technical restaurant staff. It also saves cost and space as there are no amplifiers to be purchased and installed. The other big benefit was from a design point of view; all Genelec 4000 Series installation loudspeakers are available in 120 RAL colours, and for Joan’s, we went for gold speakers throughout as they blend perfectly into the décor.”

The audio system is distributed throughout five zones (the bar, front restaurant, rear restaurant, the stage, and outdoor terrace), all of which can be controlled separately via a central touchscreen located behind the bar. This enables staff to select different sources and manage volume levels for each zone as required.

“The reaction we’ve had to the new system, both from Joan’s staff and visiting DJs, has been amazing,” confirmed Mattias. “The staff are happy because it’s really easy to use and performance is excellent, while certain DJs have commented that it’s the best system they have ever played on anywhere, which is high praise indeed! From an integrators point of view, it’s always reassuring to work with Genelec because the quality of their products is outstanding – you know that it will be an extremely low-maintenance system that will last for years and years – and in the unlikely event of a problem, the support from Genelec is always first class. It makes Genelec an easy choice.”