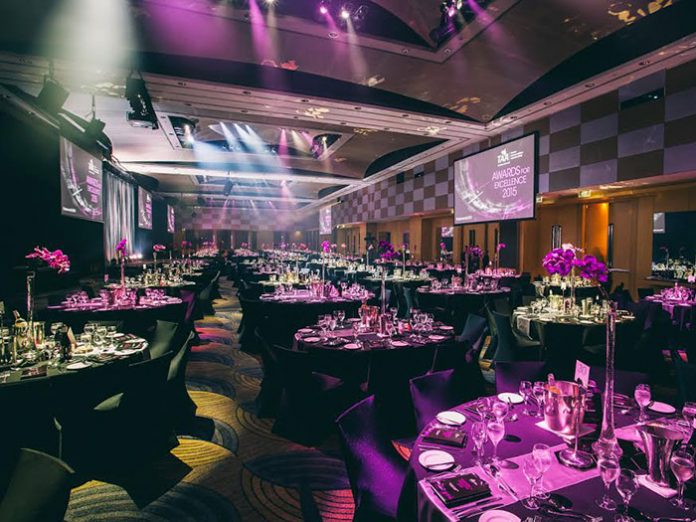 Sydney’s famous Tank Stream provided a challenge when two companies joined forces to create a staging solution for one of the city’s major hotels. The fresh water supply for the colony of Sydney in its earliest days is contained in a bulkhead, which runs directly over the ballroom of the Westin Hotel in the centre of the city.

It was one of the issues that had to be considered when Jands Venue Engineering (JVE) and event AV services provider, Staging Connections, put their skills together to engineer a faster, safer and more efficient staging management system for the hotel. One of the biggest challenges faced by JVE and Staging Connections was the installation – it had to fit in with existing hotel commitments, to make sure all the rooms involved were empty, and it couldn’t be done at night, with the risk guests could be woken by the drilling.

Working in favour of the operation was the fact there were already a number of rigging points that could be used. However, there was no structural design or test documentation for these points, so it was vital that each of them was load-tested and re-certified. Where the Tank Stream runs through the roof there was nothing, so Jands had to come up with customised engineering to brace around the bulkhead and install the points where they were needed.

As part of the requirement to provide a safe and user-friendly system, the request was made to create a set-up with a function so if the operator at the single control system could not see a motor they could not operate that motor. “A unique attribute of the ballroom is that it can be divided, depending on the needs of an event – it could be one large room, two medium rooms, or four small rooms,” said Tim Butler, State Manager for JVE.

“That means the ballroom can host a range of functions at any given time. This means that during multiple events, the single control system has the ability to control any of the 32 chain motors installed from the four control points located in each of the individual function rooms. Just try to imagine all the safety issues with operating a chain motor you cannot see: you have no idea who is beneath it, or what is even fixed to it. Through clever engineering we were able to install non-obstructive dividing wall sensors that meld into the ceiling. The sensors detect if a wall has been moved into place and relays the information to the control point, notifying the operator that a function room cannot be seen and therefore the motors in that room cannot be operated.”

Matt Danks is the Venue Installations Project Manager for Staging Connections, which prides itself as being the premier in-house audio-visual company for all the major Australian hotels. “Like many major hotels which host a range of launches and events, the Westin’s staging equipment was raised and lowered using motorised chain hoists/blocks,” Matt said. “It can be slow and clumsy and we knew there was a more efficient way of doing things which would speed up the set-up and turnaround times for the venue. Our proposal was for a computer managed chain hoist/block grid, which offers a huge amount of flexibility and is safer than other options. Management at Westin liked the concept and gave us the go-ahead.”

Matt said their idea was to permanently mount 24 chain hoist/blocks in a regular grid throughout the main ballroom, which can be divided into four smaller rooms, as well as smaller motors for additional screens around the perimeter of the room. Staging Connections has had a strong relationship with Jands for more than 20 years so there was no surprise that the company, which makes and distributes the world’s most recognised brands of audio, lighting and staging products, would be involved.

Matt said a strong part of the brief was safety. “Westin is a high profile client so there is no way we wanted any of their clients at risk, but it would be the same for any job that Jands and Staging Connections do together. It has to be the safest solution as well as the most efficient. This room has four removable walls. It now has sensors either side of the doors so the chain motor system knows if the wall is in or out. If the wall is in and an operator plugs into an empty room to do a set-up, it’s impossible to activate motors in another section of the room where there may be an audience underneath. It doesn’t take much to imagine what could happen and that is simply not an option, but engineering that level of safety was a big challenge in the design.”

“Most of the chain motor systems wouldn’t have that level of complexity, and that was a pretty big challenge for Jands to solve. They had to come up with a plan for how these sensors would recognise whether the walls were in or out, and how they would program that logic into the system – they rose to the occasion and created a bespoke system that meets every demand.”