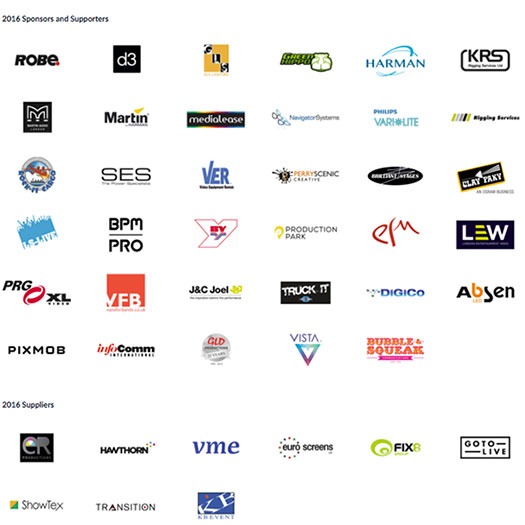 The global live production and concert touring industry’s biggest names assembled at the Battersea Evolution in London on 22 February to celebrate the TPi Awards 2016. The black tie ceremony and networking after party, which is run by Mondiale Publishing, home of TPi Magazine, honours the live event design and production world’s brightest stars and longest-serving influencers.

Under the supervision of Production Manager, GoTo Live’s Ryan Esson and Production Assistant Daniel Jones – whose regular clients include Festival Number 6, Snowbombing and Parklife – the TPi Awards 2016 was a resounding success.

This year’s technical event included a sound design from VME that utilised a Martin Audio MLA Compact system, a solar system-worthy Robe lighting rig with over 300 fixtures, operated by Hawthorn, and an expansive LED wall courtesy of Euro Screens. Cameras were from Transition and the visual content and design was created by FIX8Group, which worked closely alongside Hawthorn to fulfil the design brief of an ‘alien invasion’. The visual elements were topped off with an ER Productions’ laser display, adding another dimension to the extraterrestrial party. Venue draping was supplied by soft goods experts Showtex and production trucking was provided by KB Event.

This year’s sci-fi-themed event was so successful – in part – thanks to the incredible excitement and participation from attendees. PixMob set the scene early on with the entry wristbands – a glowing LED band that allowed the audience to be part of the show design on Planet TPi. Philips Vari-Lite’s #createlight competition enabled glowstick-suited spacemen to roam between the venue’s 122 tables, and guests enjoyed an interplanetary bar experience – sponsored by Production Park – that no doubt poured enough drinks to re-fuel the Millennium Falcon.

Two lucky guests even won £250 bar tabs from Medialease to ensure this really was the case! And, as if the thought of a sobriety test could be any funnier at this point, headline sponsor Robe invented a new sport in the form of PATTsketball; possibly the only time you’d be encouraged to hit a slamdunk in a dinner suit!

TPi Magazine & Awards General Manager, Hannah Eakins commented: “We have to thank all of our sponsors for their much-appreciated support this year, it was a pleasure to work with every one of them, and to share the success of our biggest and best TPi Awards ever! Our Production Manager Ryan Esson and all of the production suppliers did an incredible job and we have been overwhelmed by the positive feedback we have received from the industry. It was a fantastic evening and we’re very much looking forward to the next.”

During its 15th year, the TPi Awards once again paid homage to the people and companies that have created a positive impact on the entertainment technology industry. Proving the importance of crewmembers and companies in the live music community, tribute videos were seen from Metallica’s James Hetfield, U2’s Bono and production titan Jake Berry (Madonna, Rolling Stones, Black Sabbath) in order to acknowledge the career of TPi’s Outstanding Contribution award-winner, Stageco’s Hedwig De Meyer.

Another notable point in the night came when TPi dedicated the Tour Manager of the Year award to U2’s long-time, late TM, Dennis Sheehan. The veteran touring figure was a highly respected character that the industry will remember fondly for decades to come.

To host the rock ‘n’ roll clad spectacular, livewire comedian Russell Kane oversaw the formalities for the second year running, keeping the 1,400 attendees (a 200 increase in attendance from 2015, making it the largest awards in the event’s history!) in good spirits. (No pun intended!) The awards acted as a warm up show for his new material, Right Man, Wrong Age which is currently touring throughout the UK.

TPi Awards Production Manager, Ryan Esson commented: “It’s been a pleasure working on and delivering a show to celebrate the event production industry. It’s rare these days to get nerves before a show, but looking at the guestlist in the room beforehand, the nerves definitely got to me, just as Russell was about to come on stage!

“Despite this, through the sheer hard work, talent and dedication of the excellent suppliers we worked with, the passion, vision and support from all at TPi Magazine and Mondiale Publishing, we got through it and hopefully gave the 15th awards a celebration it deserved.”

Rigger of The Year:
PETE THE GREEK

Front of House Engineer of The Year:
ROB SADLER