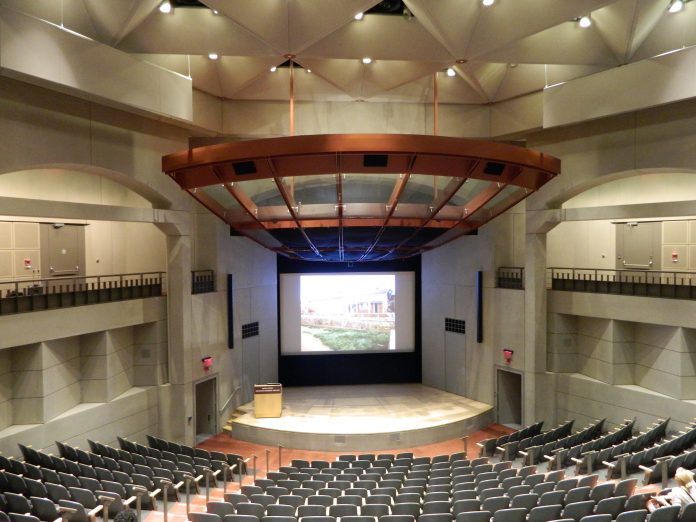 Located just off the National Mall in Washington, D.C., the United States Holocaust Memorial Museum (USHMM) is a research centre and memorial, as well as a powerful and well presented collection of artifacts, documents, photographs, films, and audio recordings about the Holocaust. The museum’s 500-seat Meyerhoff Theatre is a beautiful venue for lectures, meetings, speeches, and documentary films, but its old sound system was woefully inadequate. To design a new system that would fully meet the theatre’s needs, museum management turned to Steve Haas, founder and president of SH Acoustics. Steve specified a system based on Renkus-Heinz Iconyx series loudspeakers.

“It was great to come full circle with the Holocaust Museum on this project,” related Steve. “Since this was actually the first museum facility that I worked on out of college with my former firm back in the late ’80s and early ’90s.”

The Meyerhoff Theatre is octagonal; it was originally designed as an acoustic space for chamber music, and it’s quite live. “It had major issues with speech intelligibility and consistency of level from front to back,” Steve confirmed. Furthermore, the museum’s needs had changed in the 20 years since the old system was installed. “When the theatre first opened, the program consisted mostly of performances, with just a few spoken-word events,” Steve noted. “Now it’s 95% spoken word. The museum also shows some documentaries and other Holocaust-related films, which are mostly mono or stereo, so they hardly ever need surround.”

The new Renkus-Heinz system actually replaced two outdated sound systems. “There was a PA for announcements, which consisted of three old, full-range boxes, located about 40 feet up in a huge glass and steel canopy above the stage and aimed down at the crowd,” offered USHMM AV Specialist, Tom Fortwengler. “They were underpowered and inadequate even for announcements.”

A separate program system had been set up behind a screen at the rear of the stage. “That system also was old-school, with two giant, ancient subwoofers and a midrange horn,” Tom stated. “We had a lot of trouble with it, especially when we had guest speakers who weren’t experienced with microphones. We tried using omni mics but the program system was also underpowered, and if we pushed it, it generated feedback. It was challenging.”

Steve’s team embarked upon a complete overhaul, getting rid of the existing systems and introducing acoustic treatment to tame some of the excess reverberation without affecting the architecture-a difficult challenge. The new Renkus-Heinz Iconyx system is primarily intended for speech reinforcement but can also serve as the high and mid section of a full-range system for films.

“The main arrays are actually a combination of Iconyx systems,” said Steve. “We serve the main body of seats with two Renkus-Heinz IC16-R-IIs that flank the stage. We did our usual beam-steering with the IC-16-R-IIs, which helped deal with the acoustics.”

Complicating matters, however, the sound system also had to serve a wrap-around balcony level that starts at the level of the top row of the main body of seats. “The balcony had zero coverage with the previous system,” Tom remembered. “It was a tremendous dead spot until you got out from under the balcony. The new system solved that but it wasn’t easy.”

“The sightlines from each edge of the stage would not hit half of the mezzanine because of the way the mezzanine is pushed back,” Steve detailed. “We were concerned about trying to extend the IC16-R-II arrays up high to cover that, so we did something unusual: We put in a pair of Renkus-Heinz IC8-R-IIs above the IC16-R-IIs and crossfired them. We could get away with crossfiring because true stereo imaging isn’t critical for the speeches or for the types of films that they were showing.”

At the same time, Steve and his team used a trick that they had developed for museum exhibits. “We put in a bunch of ceiling speakers over the mezzanine seating,” he revealed. “And we delayed them so they delivered the primary sound. We used the front top IC8-R-IIs only for localisation. That gave the feeling that the image was close to the people but pulled it toward the stage-but not so far that it pulled the image to the opposite side of the stage. It worked, and the client was happy with the solution.” “The designers did a very good job of balancing out the balcony audio,” agreed Tom. “It’s subtle: You can hear the audio clearly in the ceiling speakers but its timed very well in the DSP, so it sounds natural. Audiovisual systems integrator, AVI-SPL installed the system, and they did a great job working in tandem with SH Acoustics.”

To deliver sub-lows, Steve chose Renkus-Heinz DRS18-1B non-powered subwoofers, located behind the stage. To avoid detracting from the architecture, the museum staff and Haas were careful not to expose low-frequency elements further downstage. “The subwoofers are primarily for films,” Steve noted. “They might occasionally be used for a performance but we try to avoid that because the subwoofers are behind where the performers would be, which could cause feedback.” That said, the DRS18-1Bs are moveable, enabling them to be repositioned for a particular performance.

The Meyerhoff Theatre sound system update is a lesson in changing needs, instructs Haas. “The Holocaust Museum’s needs completely shifted once they got up and running,” he pointed out. “It’s exciting that they decided to do whatever it took to optimise the theatre for their current and anticipated future programs. With the new Renkus-Heinz Iconyx system, events in the Meyerhoff Theatre will sound fantastic for many years to come.”