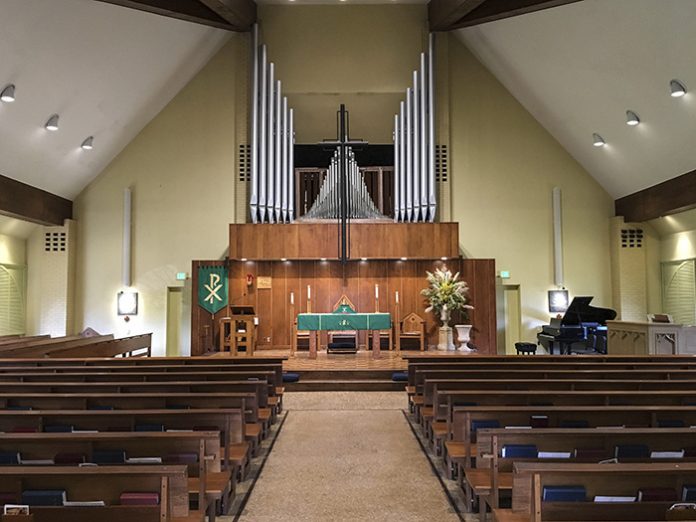 While not the equivalent of “man bites dog,” a fair-sized church without a sound system is a relative rarity nowadays unless it’s an untouchable historic building. But after more than 50 years, St. Philip’s Episcopal Church finally joined the ranks of the audio-equipped, thanks to a new Renkus-Heinz system designed and installed by AV systems integrator Sound and Communications.

“We’ve been working with St. Philip’s on and off since the 1960s; they’ve rented from us for various events many times,” noted Sound and Communications Senior System Designer/Acoustical Consultant Jeff Broome. “It’s not uncommon in our area for a small rural church with a dozen pews to not have a sound system but it’s very unusual for a church this size. The pastor had wanted a sound system for a long time. She told me when the time came, she would call me-and she did. We’re the oldest company of our type in the state, and we’re the only engineering firm in the state that does audio, video, and acoustics.”

St. Philip’s sanctuary is spacious and highly reverberant, seating a couple of hundred worshippers. “It is all sheetrock and concrete and hard wood,” Jeff reported. The rear sheetrock walls are interrupted by brick columns with openings that serve as HVAC vents. An angled ceiling features exposed beams, while windows line the sides of the room. Services are traditional, with piano, pipe organ, and choir.

“Since it’s a traditional service, the main need was speech intelligibility; people were complaining that they couldn’t understand spoken word,” recalled Jeff. “Where you sat made a big difference in what you could hear. I told the pastor and her husband, the bishop, that there are sound system technologies that could do a surprisingly good job in a reverberant room like this but it would be much better to have acoustical treatment, as well. In the end, they elected to go with just the new system, without acoustical treatment or even pew cushions. We had previous experience with Renkus-Heinz ICONYX systems, and we knew that ICONYX beam steering was the proper solution, especially with no acoustical treatment in the room. So Richard Hembree of rep firm Griffith Sales came over and set up a ICONYX demo. The pastor and bishop walked the room and were very impressed.”

The Sound and Communications team specified a pair of IC24-RN digitally steerable line arrays, mounted to the left and right of the stage. Part of Renkus-Heinz’ ICONYX Gen5 series, the IC24-RN provides up to 12 steerable beams that can be individually shaped and aimed, with beam control effective down to 250 Hz. “Renkus-Heinz ICONYX was the only solution I was aware of that would even stand a chance in that environment,” asserted Jeff. “The steerable beams enabled us to keep the sound on the congregation and off of the walls and ceiling for the most part.” The array’s slim, low-profile design made it visually unobtrusive, even without a custom paint job. The system is managed with a Biamp Nexia CS DSP; connections are analog. Sound and Communications also set the church up with TASCAM recording equipment and Audio-Technica wireless mics.

“The client is very happy with their Renkus-Heinz ICONYX system,” assured Jeff. “Now you can hear spoken word clearly and intelligibly anywhere in the sanctuary, with minimal impact on aesthetics. The project turned out very well.”