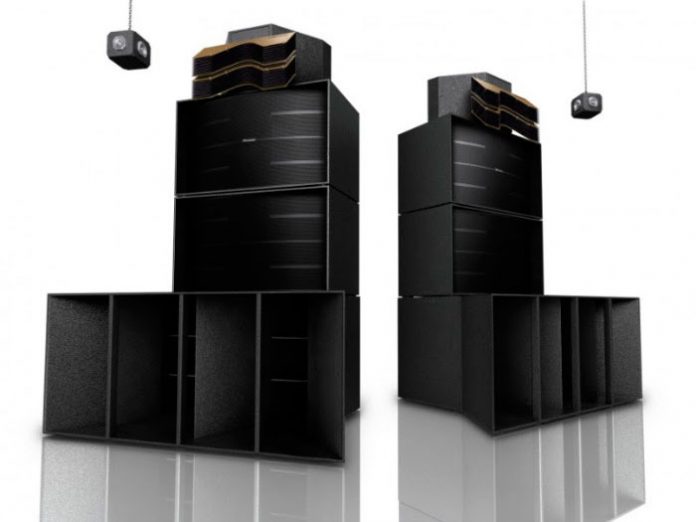 World-famous London nightclub fabric has teamed up with Pioneer Pro Audio to assemble the sound system for its first-ever outdoor event, Lovebox Festival. Taking place on 15- 16 July 2016 in London’s Victoria Park, the fabric stage is the only stage at Lovebox to commission an exclusive pro audio partner.

The fabric arena is a 2,000-capacity, 38-metre round tent designed to recreate fabric’s Room One, giving party-goers the true nightclub experience in a festival environment. Both fabric and Pioneer Pro Audio have gone to great lengths to make this happen, starting with the sound system which comprises of six three-metre GS-WAVE dancefloor stacks, 12 XY-218S 18-inch twin bass reflex subwoofers and 12 XY-122 12-inch two-way loudspeakers for infilling. Everything will be powered by Powersoft 1RU amplifiers, including multiples of high output, high efficiency K10 and K2 devices, with Armonía software.

“We wouldn’t normally consider using the GS-WAVE stacks for an outdoor event because their sound dispersion is designed for fixed installations inside nightclubs,” explained Alex Barrand, Pioneer Pro Audio Manger. “But in this instance, because Fabric are recreating a club experience, they’re the perfect choice.”

The efforts to create the feel of a nightclub don’t end with the sound system. A birch wood floor similar to the one in Fabric’s Room One is being installed to give the right kind of feedback, the tent’s walls will be draped with damping material to control sideways reflections and contain low frequencies. “When you take a sound system outdoors, that usually halves its energy,” said Pioneer’s Alex. “But we’re containing the sound with the acoustic draping and keeping the pressure in the room, so the energy will be centralised on the dance floor without escaping from the tent.”

On the amount of effort put into replicating the Fabric experience, the club’s founder, Cameron Leslie said: “We didn’t want to have a stage in a tent and just book DJs to play. We wanted to build a club within Lovebox and give the crowd the full Fabric experience. We think the Pioneer Pro Audio and Powersoft system will recreate that incredible sound we’re known for.”

Another feature paying homage to Fabric’s Room One is the DJ booth. It will be semi-exposed allowing the crowd an up-close and personal experience with DJs and artists performing from side on booth view. A unique set-up for a festival, it presented a challenge for Pioneer’s Alex and his team. “Because the booth juts out into the dance floor, we’ve got to build a system for it that will be powerful enough for the DJ to hear his mix over the main system, which will be delayed.” The booth will contain four XY-218S 18-inch subs and four XY-122 loudspeakers, producing 22kW of power in total. “It’s like a nightclub system in itself,” said Alex.

The entire sound system will be powered by Powersoft amplifiers, and headroom will be held in reserve for when the arena heats up. The temperature inside will be monitored by a Waves plugin that will automatically adjust delay times for high frequencies as the heat rises, making sure that sound is distributed evenly and perfectly in sync.

“Powersoft has been our amplifier partner since day one,” continued Alex. “They are reliable, they deliver every time and the power consumption is phenomenal. The capabilities are enormous and in particular the damping factor on the subs is unbelievable.“

Francesco Fanicchi, Powersoft’s Brand and Communication Director, also pointed out that the Pioneer system would be optimised via the presets and advanced use of the Armonia software to store different gain structures for the two different club nights. “In an outdoor application K series is perfect in fabric’s attempts to create the feel of a nightclub, and of course the efficiency of the amplifiers, in an environment where power is scarce, is vital.”

Fabric’s Promotions Manager, Andrew Blackett, summed up the project by saying: “We think that the stage and sound system that we’ve designed in collaboration with Pioneer Pro Audio will give our crowd the full Fabric club experience. We can’t wait until July to hear and feel it.”