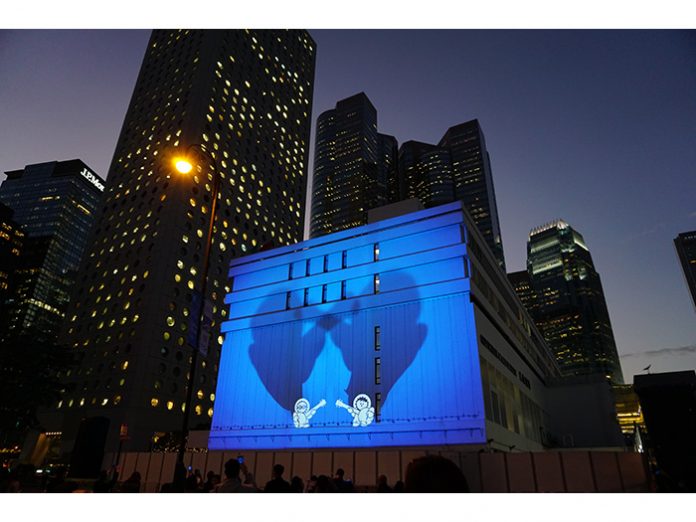 Lumieres Hong Kong marked the 20th anniversary of the establishment of the Hong Kong SAR (Special Administrative Region) with a three-night celebration of the city’s heritage and architecture.

During the three night event, landmark sites and buildings of Soho, Central and Tsim Sha Tsui became the hosts of light installations, video projections and art pieces by renowned local and international light artists. disguise was the video projection-mapping partner for Lumieres’ debut, which lit up the city’s landmarks, including City Hall, Clock Tower and General Post Office buildings.

“One of the biggest challenges was that we didn’t have 3D models or CAD plans for these historic buildings,” said Tom Attenborough, Executive Technical Director for Lumieres Hong Kong. He and his team from Imagine Believe managed the technical production and public events licensing across the 15 sites involved in the light festival. “Since disguise is one of the best in terms of 3D mapping and building works for projection, it was the perfect choice for this job.” he added.

The three sites using disguise all had extensive technical requirements. City Hall needed five disguise 4x4pros (one master, three backups and one understudy) for video mapping with twelve 4K and four 2K, 30,000 lumen projectors. The General Post Office (GPO) had one 2x4pro and one gx 2 system for six HD projectors, and the Clock Tower required two gx 1 servers and a 2x4pro backup for its six HD projectors.

Lighting Designer and Visual Artist, Yves Moreaux, was selected for the Hong Kong’s ‘Symbolic’ City Hall. “The story was about a journey through time, to evoke the evolution of Hong Kong, by showing how the richness of the present partly comes from the past and makes it possible to progress towards the future.”

Yves explains, “to create a sufficient contrast for the luminous urban landscape, which was created using giant LED screens, we needed to reach a minimum illumination level of 265 lux, so we worked with 16 projectors of 30,000 lumens each. Logistically the projectors were particularly heavy, so couldn’t easily be moved around but we needed to figure out their best position, so they didn’t block spectators views. disguise was able to calculate the projection format for each different point by integrating data of the building. This was the first time I’d used disguise, so I was very impressed when all the projectors were able to light up the façade of the building and work together to provide coverage of each point.”

Kevin Li, Technical Sales Manager for the APAC region notes that disguise’s frame replacement feature was also an important feature used at City Hall. “Yves decided he wanted to replace part of the content, using disguise’s frame replacement feature. He only had to render the content he wanted to change, not the entire video allowing him to quickly make the change, put it in the system and load it up.” Kevin adds the disguise Quickcal feature also saved the project time; “Traditionally, it would take a long time to do the lineup for 16 projectors at City Hall, however with QuickCal and the 3D model of the building, we finished the calibration in several hours.”

Moetu Batlle and David Passegand, Founders of creative studio Inook, and production company Aglagla, provided the content for the GPO. It featured the duo’s Les Anooki characters, lovable little characters who have been traveling around the world and landed on the facade of the building to illuminate the night.

Moetu and David had previously used disguise for the Night Festival in Singapore so they knew it could supply the high-resolution output they required for Lumieres Hong Kong. They add: “The good thing about disguise is that it reflects the creative process from the beginning to the end. As artists, we don’t want the content to be compressed. disguise can fulfil our need to play our Anooki animation in a high-resolution output, which is a good way to respect our artists and our work.”

Benjamin Petit, Founder of LTBL, based in France, and an interactive designer and light artist, created ‘Long Striker’ for the Clock Tower with Vendredi 4. They reprised the fun fair game called ‘High Striker’ in a digital version inspired by Chinese culture.

He explains, “our concept was based on the game where you strike an anvil with a hammer as hard as you can to ring the bell at the top of the column. On the Clock Tower the strike summons ‘Long’, the sacred dragon, who flies through LED hexagons to get the jade stone that’ll give light back to the city.” Benjamin had not used disguise prior to the project, so “to ease the creative process and all the technical work before the festival I decided to take a one-week disguise training course in London. I learned enough to be able to build the whole project from France, with connectivity to our sensor system to get the strike force and the DMX LED bars that composed the dragon’s body. On site it was mainly about calibrating the projectors – the rest of the show was already encoded.”

Benjamin liked that disguise “could handle everything altogether: video, Art-Net, DMX lights, audio. But the main advantage was getting a really good simulation of the project without the need for extra work or offline 3D simulation. We especially enjoyed the beta VR feature, being immersed in the scene really helped with figuring out proportions.”