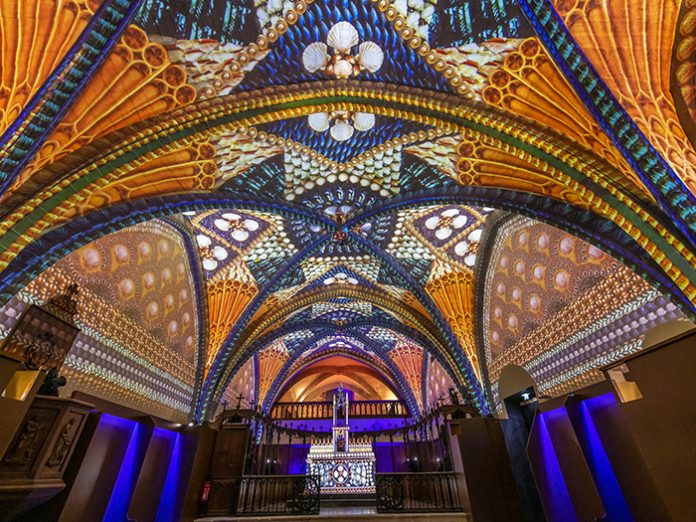 On 26 June 2021, the digital art centre and UNESCO World Heritage Site, Hôtel des Lumières unveiled two new immersive rooms. The art centre, which was inaugurated in June 2020, sits inside the Hôtel-Dieu, built up against the cathedral of Puy-en-Velay, France. A striking structure that welcomed pilgrims during the 11th and 12th Centuries, the cathedral founded a hospice to care for the most disadvantaged patients. Now, the building is used to house art exhibitions and installations, with the Hôtel des Lumières project designed and installed by French integration company, VLS, with help from Artistic Director, Gilbert Coudène and production company, Light Event Consulting.

The technical installation relies on a total of 67 video projectors from Optoma and Epson, and 15 Modulo Player and Modulo Kinetic media servers from Modulo Pi. This is combined with audio from L-Acoustics and Nexo, as well as a lighting package from Oxo lighting to create an immersive, artistic, audio-visual spectacle that draws on the venue’s rich history.

The Hôtel des Lumières’ two new immersive spaces consist of the Compostela show in the heart of the old chapel of the Hôtel-Dieu, with projected frescoes painting the walls and vaults of the edifice, and the Salle des Cuves (The Vats Room), which offers an overview of the main sound and light shows in the Auvergne-Rhône-Alpes region.

A 3D scan of the chapel was carried out and imported into Modulo Kinetic, with VLS utilising the 3D calibration feature to ensure that the projected media match the ribbed vaults of the chapel perfectly.

Yoann Bernard, Technical Manager of the Hôtel des Lumières, explained: “Modulo Kinetic allowed us to easily position the video-projectors thanks to the 3D modelling. During the installation, we decided to change the location of one of the projectors, which could be done very easily without having to export the images again.”

Show control is also managed through the media server, and custom panels have been created in Modulo Kinetic’s UI Designer to control the installation. “The software is great. I really like the part that allows us to create our own remote controls for an iPad, for example,” explained Yoann. “On the panel, each room shows the location of the projectors so that everything can be managed through the iPad when I’m away. Without necessarily having a great deal of knowledge, people who will oversee the venue can easily start or turn off the projectors.”

In addition to the mapping and media playback, Modulo Kinetic ensures the distribution of the soundtrack, and the control of the lighting scenography that accompanies the projection. Four Nexo PS-8 loudspeakers, one L15 subwoofer and one NXAMP4X1MK2 amplifier were installed as the sound system in the Compostela. Cyril Toussaint Technical Director at VLS, explained the selection: “As the projection is 360°, the audience had to be immersed in the sound as well. We installed the loudspeakers high up to reinforce this sensation without interfering with the projection.”

The lighting consists of four Oxo lighting Colorbeams, 12 Pixiline 150W LED bars and five Pixiline 75W bars. Cyril furthered: “We installed Oxo Colorbeams to light the wooden parts of the chapel, as well as the back vault. The Pixilines light the walls around the altar and the LED strips were installed around the public area to highlight the benches along the walls. For lighting control, we programmed with an MA Lighting grandMA2. We then we recorded this program in the kinetic designer with a DMX Enttec Ode MK2 ethernet interface to be able to play it back without the console during the show.”

Another room inaugurated in summer 2021, the Salle des Cuves (The Vats Room) reconstructs emblematic buildings, such as the Saint-Flour Cathedral and the Basilica of Fourvière in Lyon in 3D models for a miniature projection of each site’s show. The projection relies on eight pico projectors from Optoma and two Modulo Player media servers from Modulo Pi.

These new spaces join the two immersive rooms of the Hôtel des Lumières inaugurated in 2020. In each of the 200 sq metre rooms, an immersive 22-minute show is offered to visitors. The public embarks on an imaginary journey in the style of Jules Verne’s novels. The impressionist light shows immerse the audience in the greatest masterpieces of Monet, Pissarro, Sisley, Van Gogh, and many others.

For these immersive shows, video is projected on the walls and floor thanks to 17 Epson and Optoma video projectors in the first room, and 16 projectors in the second room. Soft edge blending, 2D mapping, show playback, and show control are provided by seven Modulo Players from Modulo Pi. “Everything is pre-programmed to automatically start video projectors, launch shows, and shutdown projectors every day,” commented Yoann.

Custom control panels were also created using the UI Designer embedded in Modulo Player to facilitate daily operations. “The biggest advantage is that I can change whatever I want. We recently added a night session at 9pm, where I was able to turn on the projectors, launch the show, and turn off the projectors remotely from my iPad,” furthered Yoann. “When a group of visitors are late, I can do a ‘stop show’ and ‘start show’ at the desired time from my tablet.”

The digital art centre completes the immersive experience of Puy de Lumières available at night-time. Launched in 2017, Puy de Lumières sublimates the city’s exceptional architectural heritage through projections on its most symbolic buildings. Amongst the nine illuminated sites, the cathedral of Puy-en-Velay, the Crozatier Museum and the Rocher Saint-Michel come to life at nightfall. The brand-new additions to the Hôtel des Lumières create another level of projection mapping, providing guests with unique, visual treats. The Hôtel des Lumières is currently closed, but will reopen again during the All Saints and Christmas holidays.