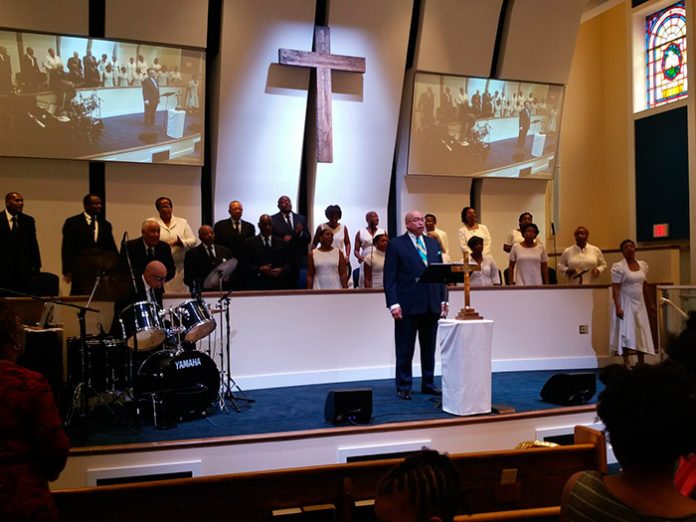 Founded in 1863, Third Baptist Church constructed its historic current structure in 1903. Recently, the church completed a major interior renovation with a dramatic new appearance and a modern audio system.

To achieve these goals, Chris designed a system based on Community’s E SERIES loudspeakers. Chris and his team knew they couldn’t just replace the church’s existing central cluster because of the visual impact on the interior design. Instead, they modelled the system with a stack of the ENTASYS ENT-FR columns on each side of the stage. Knowing they would almost disappear visually against the wall, the line-array effect would keep the sound in the seating area and away from ceiling reflections.

The system includes Shure wireless microphones for the pastor and the worship team and existing microphones were reused for the choir. A Roland digital mixer provides automatic or manual control of the system switched with an AMX control panel. QSC amplifiers power the system with a QSC Q-Sys processor for networking and DSP services. AV/COM also installed the church’s new video system with Barco projectors and a Roland video switch. The church plans to begin video streaming of its services in the near future.

Chris stated how the E SERIES loudspeakers provide excellent directional control and that the columns are behind every microphone. Chris continued by explaining how he and others have had excellent vocal clarity and no feedback. Chris added that this was the team’s first experience with the E SERIES in a high-level music environment and they were very pleased with their ability to provide great music quality and consistent distribution even when projecting 100dB into the seating space.