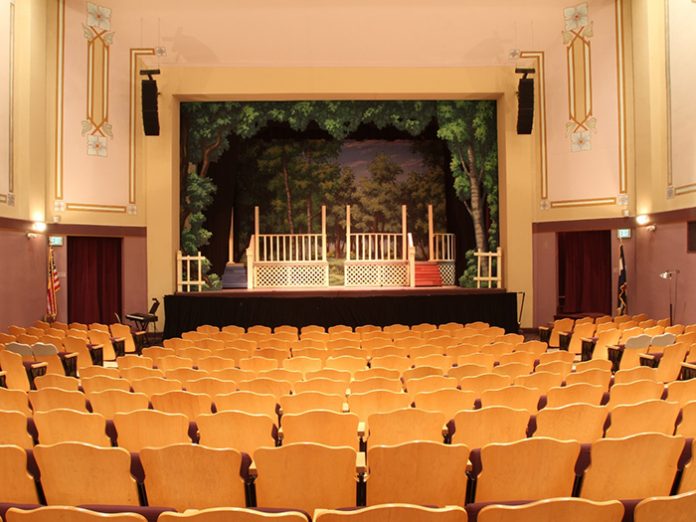 With historic entertainment venues predating sound reinforcement and their physical features often being protected, it can be a major challenge to meet the audio expectations of 21st century audiences. But at the Rialto Theatre in Loveland, Colorado, an Alcons LR7 micro line array system has achieved exactly that.

As with many historic movie theatres, the 1920-built Rialto enjoyed a comparatively short initial heyday. Designed for both silent fims and vaudeville, which, by the end of the 1960s was in decline, finally being killed off by the rise of multiplexes and video in 1976. It briefly reopened as a retail complex but then closed again, seemingly for good.

However the 1990s saw a revival and some venues like the Rialto found a new multipurpose role as combined movie house, live arts venue and community centre. Restored and reopened in 1996, 20 years later the Rialto continues to thrive. But the city-owned venue’s sound reinforcement system needed updating and technical coordinator Dave Brull was tasked with matching a small grant with sound that would match 21st century audience expectations.

“Rialto’s design was fairly standard for the era, with many hard and reflective surfaces like plaster and maple,” he said. “The building is protected so there were a number of constraints to deal with, like preserving original features, and we had to try and provide high quality sound reinforcement for a much broader range of events than it was ever designed for.”

Nowadays the single-balcony auditorium holds around 450 people, but their aural expectations are no doubt considerably higher than the 1000+ who would squeeze in to hear an orchestra accompany silent films 90 years ago.

“Being a municipal facility, budgets are always tight and I had a difficult time in matching the available funding with bringing the venue up to the standard we wanted,” explained Dave. “I spent some time making contacts, getting site surveys done and demos arranged. I had several of the ‘marquee brand’ manufacturers in – the quote from one was three times our budget.”

But when Dave visited the USITT show, the breakthrough was made. “I spoke to David Rahn of Alcons Audio USA and heard a demonstration of the LR7 system. It was obvious it had characteristics which were ideal for our situation,” he said.

“Needing a system that would straddle many different types of live performance and the sometimes contrary needs of cinema sound, all within the constraints of the venue, meant high SPLs with clear, consistent quality and a precise pattern to avoid both the balcony front and pushing sound into the walls. I was really pleased we it seemed could achieve all that with the LR7.”

After the USITT demo, David took Dave and his team to hear the Alcons system at e-Town Hall in Boulder, Colorado. “It was fabulous. Everywhere in the room the sound had great detail, the reproduction of stringed instruments had uncanny realism and there was fantastic intelligibility in the vocals. That really convinced me,” said Dave.

Supplied by Boulder-based Wind Over The Earth, the chosen Alcons system comprised eight LR7/90 per side with two SR9 MkII micro monitors as front fills. Powered and controlled by Sentinel3 and Sentinel10 amplified loudspeaker controllers, the system incorporates the Rialto’s existing subwoofers.

“The LR7 can handle much lower frequencies than I was expecting and it was surprisingly painless to incorporate the existing subs. Acoustically the transition between them is seamless. Being on a tight budget, that was a real plus,” said Dave. “We hung the LR7s from the beams used for the old system, re-trimmed to fly it higher. The light weight of the system made that easy and the hardware is as good as anything I’ve seen. For historic theatres that’s another on the list of things that make the system excellent.”

Once the system was installed, it was the turn of the Rialto’s patrons and engineers to pass judgment.

“A couple of engineers who used the old system commented straight away on how much detail you can hear in the Alcons system,” said Dave. “You can really bring the SPLs down to negate the nastier acoustic things that the room does to a mix. And for the first time ever the balcony seating is on par with the rest of the room – that’s been a giant leap. Our management and patrons also immediately noticed that the venue sounds a lot better, although they probably don’t appreciate quite what a feat it is within the price range!

“We feel we’ve really accomplished something here, achieving what we wanted without additional resources. The value of the Alcons system is extraordinary.”