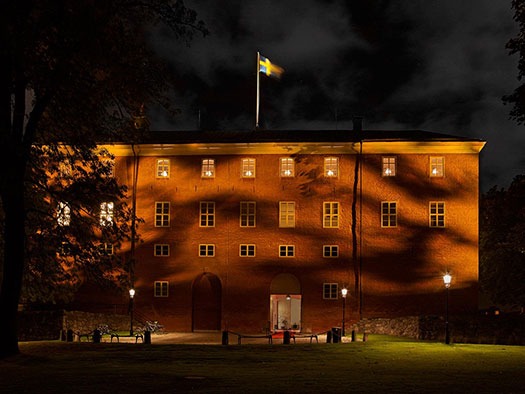 Harman’s Martin Exterior 400 Image Projector continues to illuminate the façade of Sweden’s iconic Västerås Castle, a critical function in the depths of a Scandinavian winter. The fully weatherproof Martin LED projector was selected and deployed by Sweden’s ÅF Lighting, one of the world’s premier lighting design firms, which cited the projector’s more than 7,000 lumens of power and its ability to easily integrate the dynamic gobo projections, such as textiles, patterns and graphics, with any outdoor lighting design as deciding factors.

Not long after the installation was completed, it was celebrated at the annual Västerås Culture Night, to which the world is invited to celebrate the area’s culture with a variety of concerts, dances and theatrical performances. Västerås Castle has assumed a prominent role in the event and has been lauded for the beautiful backdrop its lighting lends the festivities.

Following ÅF Lighting’s successful implementation at nearby Örebro Castle, the project was commissioned by the National Property Board of Sweden and the Municipality of Västerås with the goal of increasing public awareness of the castle. The project was rooted in what ÅF Lighting calls New Nordic Lighting, a concept that embraces a 24-hour approach to lighting and incorporates both natural and powered-light sources.

Accordingly, ÅF Lighting’s Head of Design, Kai Piippo, worked closely with Martin by HARMAN on a design driven by four distinct themes: Sunrise, when the day’s first rays grace the castle’s façade with a warm glow; Every Day, characterised by a quality of light that brings out the warm colours of the façade’s stone; Deep Blue, a surreal atmosphere known as Cultural Night; and Moonlight, a cold light that takes on a mysterious aura as it shines through nearby leaves and branches.

Other challenges faced by Kai’s team included finding a solution that precisely addressed the project’s creative needs, obtaining approvals from government agencies and working within the confines of a severely limited budget. “We needed a solution that was both cost effective and capable of creating a wide variety of colours and themes,” said Kai. “Martin’s Exterior 400 IPs were the perfect fit for the themes we wanted to create as well as for this type of outdoor installation.”

Kai’s confidence in the Martin brand is based on many years of experience. “I have worked with Martin products since my time as a stage lighting designer in the 1980’s and have followed the company ever since,” he concluded. “Martin has always been a reliable partner. I cannot imagine the success of the Västerås Castle project without the versatility of Martin’s architectural solutions.”

Winnipeg Church Uses Renkus-Heinz to Put Sound on the Congregation