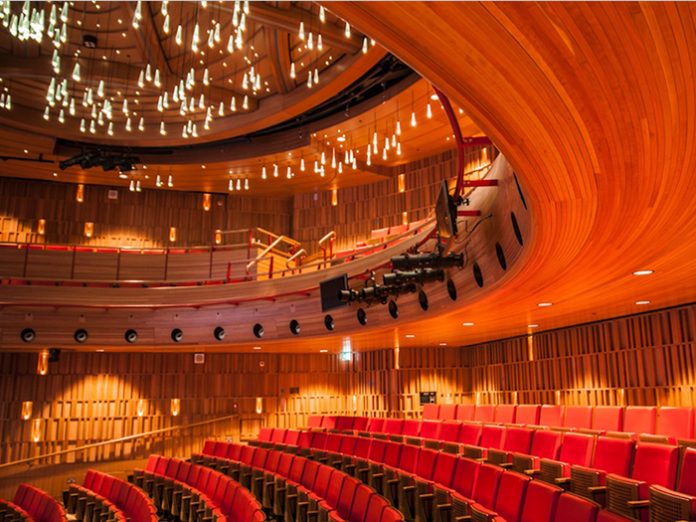 Founded in 1822, the Academy is the oldest and most established musical conservatoire in the UK. With nearly 700 students hailing from over 50 countries, the Academy provides training and education for some of the most talented musicians in the world through diverse programs such as instrumental performance, conducting, composition, musical theatre, opera and more.

“We were starting to get a little bit panicky because at the time of the renovations there were no fixtures on the market that met our standards—then along came the MAC Encore,” said Jake Wiltshire, Technical Director and Lighting Designer at Royal Music Academy. “The Encore fixtures are phenomenal—we’ve got them permanently installed in all our key positions in the theatre. We use them for cross lights, front-of-house lights, everything—they totally make the rig for me.”

The Academy used the renovation project as an opportunity to replace their old Martin MAC TW1 fixtures from the Sir Jack Lyons Theatre. They wanted modern fixtures capable of creating big, punchy backlight images and natural skin tones with texture and definition. Since the Academy hosts so many world-class performances each year, they often need to rent additional lighting fixtures, which meant the new units needed to be easily supplemented with existing hire stock. Most importantly, the new fixtures would have to be whisper-quiet in order to keep from distracting guests during intimate performances. After surveying what was available on the market, the Academy found the MAC Encore Series to be the only fixtures that met their needs.

“The Encore series gives us the best of both worlds—we can create subtle, detailed skin tones or a powerful emotional punch with vivid colours, sharp optics, and a great beam shape,” said Jack. “It’s a very adaptable fixture—it’s small and nimble enough to get it into places you can’t get most moving lights. Plus they’re very energy efficient, so it doesn’t generate as much heat. Most importantly, it operates silently so our guests can enjoy the show without any distractions.”

The Susie Sainsbury Theatre officially opened on March 14, 2018, with a performance of Jonathan Dove’s Flight by the Royal Academy Opera—making their triumphant return after years of touring during the renovations. The opening of the new theatre was such a prestigious event it even garnered an appearance from Her Royal Highness, The Princess Royal and the Duchess of Gloucester.