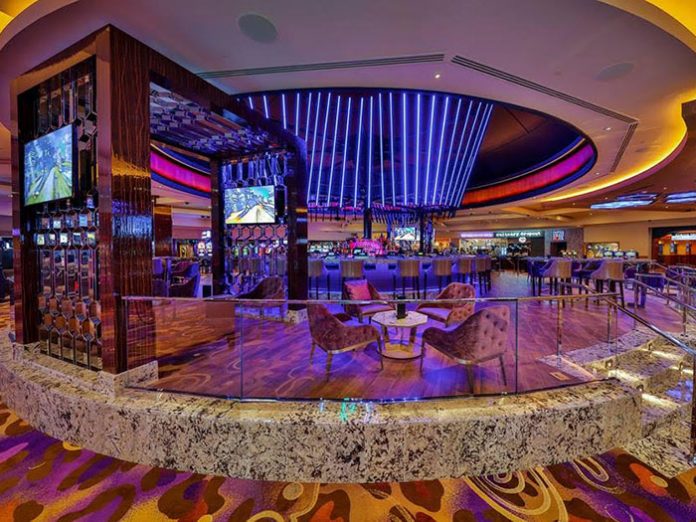 June this year, the Hard Rock Hotel had a Final Call party for its famous bar, and promised to reopen the 20-year-old landmark with a new design that would make its future as glittering as its past. This goal was accomplished in stunning fashion, thanks to a massive and dazzling abstract design by LD Robert Athey of All Things Integrated that drew on the pixel mapping capabilities of 300 ÉPIX Strip 2.0 LED linear fixtures from Chauvet Professional

The ultra-bright ÉPIX strips form a circle over the round bar, shining like a crown and riveting eyes from every spot in the casino. For 24 hours a day, seven days a week, the strips display stunning video images that coordinate with the musical performances shown on the room’s video monitors, as well as with architectural lights around the bar.

“It creates a very immersive experience that really draws you in,” Robert said of the new design. “I think its bold high-tech looks let everyone know that the Center Bar is back and totally ahead of the curve.”

Robert, who’s enjoyed a longstanding relationship with the Hard Rock Hotel and has been involved in numerous projects for the chain, including the design of the iconic video wall at the Las Vegas hotel’s registration desk and Vanity Nightclub, was called in by management to create a revitalising design for the Center Bar.

“When it came time to redesign the Center Bar, they called on us, and we helped drive several concepts including using the iconic dome and video mapping it,” he said. “When all of the elements were on the table a committee of owners, operations people and others met and it was agreed to move in the direction of the abstract design for the dome. The concept was to create something that drew attention to the Center Bar and pulled the whole room together with a unifying look. The pixel mapped ÉPIX strips did this by tying the music videos with light.”

Robert credits Content Designer and Programmer Chris Lose and Nevin Edwards of National Technology Associates with helping to pull the immersive design together. “Chris’ programming makes the whole structure come alive,” he said, “and Nevin did a great job executing the plan during the installation process.”

“Seeing these images on the ÉPIX strips makes it feel like you’re immersed in a concert venue,” said Chris. “As the content designer and programmer, I was given a lot of freedom to display whatever I felt would represent the Hard Rock Hotel best. I generated custom content in Adobe After Effects and programmed with the Chauvet VIP Media Server and ArKaos.

“The ArKaos Media Master Pro 4 and the Chauvet VIP Media Server have been rock solid,” he continued. “We’re using most every feature of the ArKaos. One input is used for Video Dust and the MIDI pad is used for triggers. We are using ArtNet for the LED mapping, and we’re using a handful of the effects to liven up the content. Having the ability to create a cue stack in ArKaos made it so that I did not even need a console to do any of the programming. I’m especially impressed that the VIP Media Server is able to take content in most any format.”

The pixel mapped ÉPIX Strip 2.0 fixtures replaced a large globe that had dominated the area over the Center Bar. Although the new abstract design created with the LED strips looks like the perfect fit for this area, installing it was not without challenges.

“Like every project that looks this spectacular, a lot of hard work and teamwork were required to make it happen,” said Nevin. “A cool thing about this project is that we created and installed structural pipe work to attach the ÉPIX strips to, and we mounted ÉPIX drives on top of the pipe structure. The brightness of the ÉPIX units has been amazing; we run them at 60% so they don’t overshadow the other lights.”

Robert also emphasised the importance of teamwork in revitalising this Las Vegas icon. “Howard Tribble of Warner Hospitality was the client, and he deserves a lot of credit for allowing us to be creative,” he said. “Also John Moss, the head of Hard Rock Hotel AV, did an amazing job helping us integrate the system in the facility’s existing infrastructure. In the end, we accomplished something we can all be proud of – we did more than restore a Las Vegas landmark; we helped give it a new identity for a new era.”