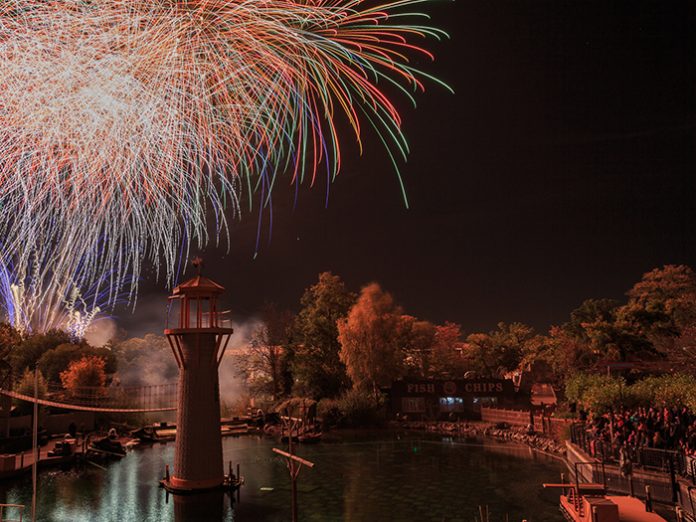 The end-of-season fireworks display at LEGOLAND is one of the Windsor resort’s most anticipated events on the calendar. Six shows are held over three weekends during late October and early November, with this year’s ‘LEGOLAND Heroes’ extravaganza, deemed the most spectacular and ambitious yet. Sound designer, Dave Shepherd, has been looking after the sound for the fireworks display since 2003. This year, following the demos held at LH2 in June, he opted to try out the recently launched HALO Arena large format line array system from EM Acoustics.

Dave explained that a large percentage of the park is covered with dedicated sound systems for the fireworks display, which is not without its challenges: “There are multiple viewing areas populated with buildings and trees that we need to work around. We also have fairly tight noise restrictions due to the proximity of local residents to the park’s boundary,” said Dave.

“The largest viewing area of the park is Miniland where the public can be up to 170m away from the sound system, but due to the topology of this area, it’s impossible to set up delay systems meaning that the coverage has to come entirely from the main left/right line arrays. It’s therefore key for me to use a system with properly controlled dispersion and excellent rear rejection characteristics so that I can put the sound where I need it and not cause a nuisance for the neighbours. Having heard the HALO-A system at EM’s LH2 demo this summer and been very impressed, I was keen to try it out, particularly in view of the challenges we face at this venue.”

“HALO-A surpassed all expectations and helped deliver the best show to date,” declared Dave. “Between comments from the crew who’d never used the system before about how quick and easy it was to rig, and from both the client and the crew about how good the area sounded, it was clear that choice to use HALO Arena proved to be a great success. The rear rejection was phenomenal which allowed me to achieve a good show volume for the audience without having an impact on the neighbours. We were all thoroughly impressed with the results.”

Associate engineer for Delta, Griff Hewis, agreed: “I was impressed by the demo I attended at G-Live in Guildford so, like Dave, I was eager to use the new EM HALO-A system out in the field. Four weeks left outdoors in inclement October weather is always a good road test for any new product and it didn’t miss a beat! As Dave’s ears out in the park I can say it exceeded my expectations in terms of throw and coverage. Standing around 120m away the arrays were still crystal clear and it was certainly on a par with the other leading manufacturers systems we have used in the park. I would happily use it again for future projects.”

Indeed, EM Acoustics has proved to be a popular brand for the LEGOLAND Windsor resort as Dave has recently installed some custom outdoor EMS-81Xs and EMS-118 subwoofers as part of LEGOLAND’s permanent stunt show installation. “For the first time we were able to utilise the stunt show system to enhance the audio experience in the fireworks viewing area situated in that location, which made a big difference,” he noted. For the past five years, Dave has also installed twenty EMS-51s in a forest area of the park for a ‘Brick or Treat’ themed Halloween event running every day during October. These individually fed speakers allow him to create a soundscape consisting of background music as well as spot and moving sound effects.

Hannah Ratcliffe, head of entertainment at LEGOLAND Windsor resort, was more than satisfied with the results. “I’m always impressed by the audio delivered by Dave and the team at Delta Live, but this year we have really been able to up our game through the use of the new kit from EM Acoustics,” she remarked. “From the big HALO-A system in MINILAND through to the smaller kit in the Enchanted Forest, we are able to surpass our guests’ expectations time and again, and deliver amazing and memorable experiences through high quality and engaging sound systems.”