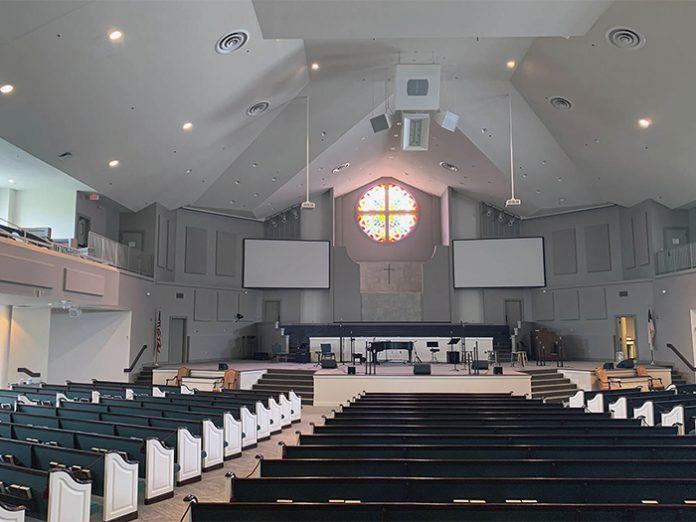 Great Bridge Baptist Church in Chesapeake, Virginia has an uncompromising commitment to reflecting God’s love and building loving relationships. Its contemporary-style services lift spirits with music provided by an orchestra, a choir, and a praise band. It’s a big production, but until recently, all of that effort only partially connected because the existing sound reinforcement system’s coverage of Great Bridge Baptist Church’s 1,500-plus seats was far from ideal. Regional AV integration firm RTW Media, based in Richmond – serving the Virginia/DC/Maryland areas – designed and installed a big-impact, small-footprint sound reinforcement system centred on Danley Sound Lab’s efficient point-source products. Using the patented technologies of acoustical maverick Tom Danley, the Danley boxes give Great Bridge Baptist Church remarkably even coverage from front to back and from side to side, in the balconies, under the balconies, and even on the stage and in the orchestra pit.

“The sound system at Great Bridge Baptist Church was old and tired,” said Zack Guida, operations manager at RTW Media. “The coverage was lacking, the timing was off, and it really didn’t do justice to the amazing services they are putting on. When we met with the church, they explained that not only did they want an impactful sound system, but they also wanted consoles and backbone technology to give them creative audio and video capabilities that would further allow them to connect with the congregation, both in person, and through digital media. The church’s vision included a video and camera system overhaul as well, so we had to be mindful of the overall budget.

Zack continued: “Pound for pound, Danley provides more value than any other loudspeaker manufacturer on the market, in part because a complete Danley system requires so few boxes. We modeled the system for Great Bridge and found that a single Danley Jericho could do the work of an eighteen-plus box line array, but with much greater fidelity, no comb filtering, perfectly even coverage, and incredible headroom.” RTW Media had completed multiple Danley installations on the campus of Regent University and the Christian Broadcasting Network, including their chapel and theater. Zack brought folks from Great Bridge Baptist Church to hear those systems, and they were, in his words, “absolutely blown away!” It sealed the deal.

Great Bridge Baptist Church’s new Danley system is centered on a single Danley J3-94 Jericho Horn, the same loudspeaker used to light up 100,000-seat football stadiums. A massive Danley BC415 subwoofer flies above it to deliver soul-stirring bass response, and a pair of Danley SH46 loudspeakers flank it to cover the balconies that run the length of the sanctuary on either side. Four Danley SHmini loudspeakers bring up the articulation under the balconies, and four more SHmini loudspeakers span the stage in front to provide directionality for those seated near the front. Three Danley DNA 20k4 Pro and two Danley DNA 10k4 Pro amplifiers deliver a combined 80,000 Watts distributed across twenty amplifier channels with onboard DSP and model-specific presets.

The musicians and speakers at Great Bridge Baptist Church benefit from Danley’s phase-coherent, faithful reproduction as well. Four Danley FLX12 loudspeakers can move around the stage as needed, with two additional FLX12s mounted on poles for the choir. Six Danley Nano loudspeakers distribute coverage throughout the orchestra pit. A 3000-Watt, eight-channel Danley DNA 3k8 amplifier powers the monitor system, and eight channels of Shure PSM deliver wireless, in-ear monitoring. “The Danley monitoring package is really unique,” Zack said. “Other churches with so much going on – choir, orchestra, praise band – struggle to get everyone a monitor mix that sounds good without also producing so much sound that it’s bouncing all around the sanctuary. With a small footprint, Danley boxes have tight pattern control and articulation that cuts through so the musicians can hear what’s going on without resorting to massive SPLs.”

With big money saved on the Danley sound reinforcement system, Great Bridge Baptist Church was able to go all-in on its core audio infrastructure and video system. An Allen & Heath S7000 dLive console with a DM64 64-channel I/O and two DX168 auxiliary boxes serves at front-of-house. An Allen & Heath C3500 console with an associated DMO engine serves in the studio, with Dante serving as the backbone for networked audio throughout the building. Four Panasonic PTZ cameras feed a Blackmagic broadcast multi-format switcher with a Panasonic PTZ camera control as interface. Two Panasonic 12,000 lumens WUXGA projectors, a 98-inch display, and a 110-inch video wall, handle the visual needs of the congregation, choir and welcome area. “The entire building is now connected with broadcast level SDI video backbone and Dante audio, and will give the church full flexibility in delivering a high-quality product both in the seats of the sanctuary and wherever congregation streams the service from.” Guida notes.

“The Danley performance is unbelievable and every seat gets perfect coverage,” Guida said. “The sound is crisp and clear. Although the COVID-19 situation has delayed the system’s debut in front of the full congregation, everyone at the church who has heard it is blown away. It exceeds all expectations. Previously, they thought the only way to achieve concert-level audio was to make it look like a stereotypical concert venue: two massive 20-box line arrays on each side with piles of ground-stacked dual-18 subs spread across the front of the stage. They were astounded to achieve the sound quality and impact they wanted with so few boxes, a much cleaner aesthetic, and forty-percent of the cost.”