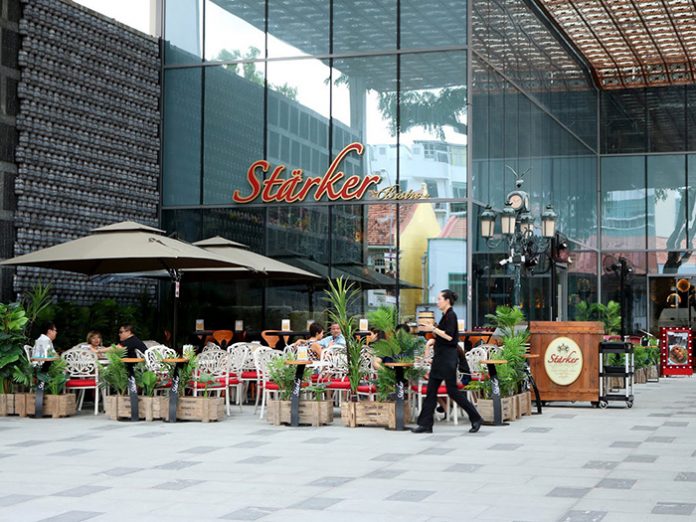 When you walk into the latest Starker Fresh Beer Outlet at 86 East Coast Road in Singapore, you’ll likely notice the elaborate interior work. The venue’s aim was to reinforce its authentic German heritage and brewing tenacity by using the traditional, European-influenced design associated with beer drinking. Even their name Starker is derived from the German meaning stronger.

Having spent a large amount of money on construction, the owners wanted a sound system that truly is representative of the form and function of the venue. Known widely for their great audio installs and experienced crew, Luther Music PTE LTD was briefed to provide a system that was both easy to operate and looks as good as it sounds.

With many restrictions on the method of installation and speaker location, Luther Music designed a system that avoided drilling and neatly hid from view. The team presented a KT2 and KU26 solution from K-array and easily won immediate approval with its sleek Italian design and proven performance. 12 units of the KT2 Tornado and three units of the ultra-slim KU26 subwoofers were selected for their quality and compact size.

“K-array was selected simply because it had the right mix of high quality sound and was not a visual hindrance to the restaurant’s theme,” said Luther Ong, President of Luther Music.

The client was surprised that the speakers virtually invisible and was taken aback with the deep bass produced by such a small, slim subwoofer. Overall, they were very satisfied and extremely impressed. “Thank you Luther for presenting such a fine example of a well-thought out layout and competent system design. You guys are awesome,” concluded Benedict Lim of Starker Fresh Beer.