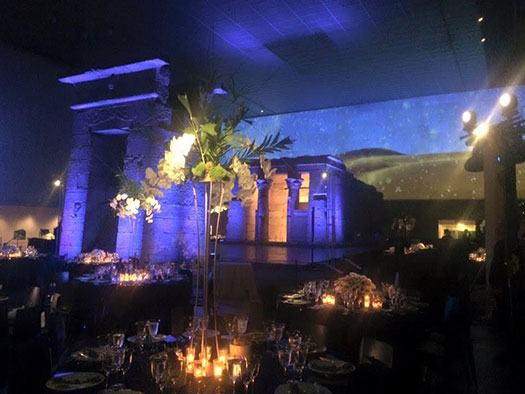 It is one of the most popular exhibits in New York’s most visited museum. Built in 15 BC, the ancient Egyptian Temple of Dendur at the Metropolitan Museum of Art draws visitors from across the globe. It is the place where dignitaries seem to linger longest when they tour the museum and where a visitor is liable to get lost in thought. As one critic noted, it is easy to imagine being transported back in time when admiring the massive sandstone structure.  Frost Productions, along with lighting designers Walter Chavez and Jason (“Blends”) Ayala, celebrated the transformative power of this exhibit recently with help from the colour mixing power of Chauvet Professional fixtures.

Frost was retained to produce a holiday party at the museum in the room that houses the temple, along with a host of other ancient Egyptian artifacts.  Production designers Paul Witte and Mun Kong and their team drew on the evocative ambience of the room by displaying a massive projection extending the perspective of the space covering the entire museum wall.  The lighting design for the party complemented these images and expanded their impact by mirroring their colours throughout the room.

“The lighting really helped build an immersive environment,” said Jason. “Paul and his team created some captivating images on the wall that were truly unique. For example, they’d show the Egyptian desert, but it would be snowing, and when this happened, we bathed the room in some very rich blue light, adding another ‘cool’ element. At other points in the evening when there were images of a desert sunset, the lighting would transition to deep ambers and reds, continuing the visual experience throughout the whole room.”

Ayala credits the Chauvet Professional fixtures in the rig that he and Chavez designed with playing a key role in creating this colourful setting. “We used Rogue R2 Washes and WELL FLEX fixtures,” he said. “Both gave us the freedom to create a variety of very subtle color changes to get the kind of atmosphere we were looking for at this event.”

Walter and Jason flew 12 of the Rogue R2 RGBW LED Washes around the perimeter of the room on truss. “We got great coverage from these fixtures, thanks in part to their incredible zoom range,” said Jason. “We used them as stage lighting when the band performed. At other times we used them to colourise the room often in coordination with the colours that were dominating the video.”

The wireless battery-powered WELL FLEX RGBW LED wash was used to uplight the Temple of Dendur itself and other artifacts in the room. “There are some very impressive artifacts in the room, and the uplighting really dramatised them,” said Jason. “We got some great colours out of the WELL FLEXes, which helped to weave the artifacts into the entire presentation.”

Positioning the WELL FLEX fixtures throughout the room was relatively simple, according to Jason “These are wirelessly controlled battery-powered fixtures, so we didn’t have to worry about wiring and power connections,” he said. “We ran everything from our grandMA2 console. All of the fixtures were hard wired, except for the WELLs, which were very easy to control wirelessly. There are always challenges in any project, but with the WELLs finding power sources is not one of them.”

Looking back on the event, Jason believes the biggest challenge in this project was creating a lighting rig that did justice to its surroundings. “You look around this room and you see so many things of historic and artistic value that you want to make sure your lighting does them justice,” he said. “Working with Paul and Walter made me more confident we would create something that reflected well on these surroundings.”