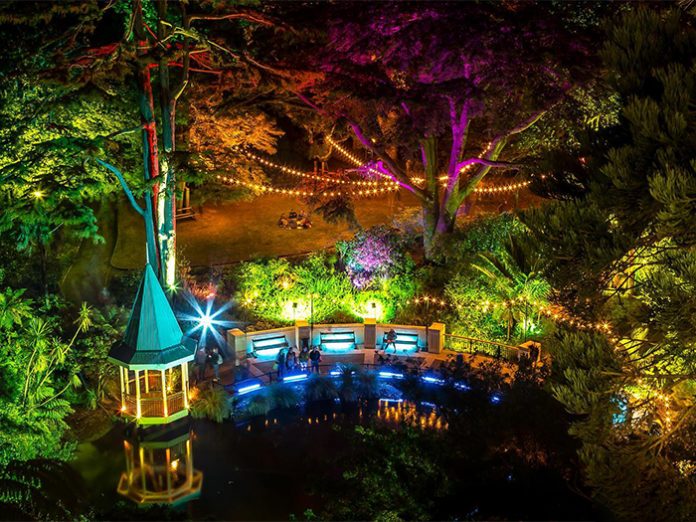 Every year in New Zealand, Wellington’s Botanic Gardens is transformed into Gardens Magic featuring a free concert series with an eclectic mix of music from over 100 performers during 18 nights.

As the sun goes down, the Botanic Gardens transform into a wonderland of lights, with colourful installations and displays created by MJF Lighting Limited.

This year, MJF Lighting had heaps of Firefly LED Festoon Lighting to add extra sparkle to the popular event. Designed for permanent outdoor use, Firefly LED Festoon Lighting can more than handle New Zealand’s temperamental weather!
“We did have some festoon lighting but it was the old school version so it was definitely time for an upgrade,” commented Blair McLaren, MJF’s Wellington Operations Manager. “Having festoon lighting with an outdoor rating plus LED technology makes all the difference!”

Blair added that an important factor when choosing Firefly LED Festooning was the fact that they didn’t have to lamp or de-lamp the strings of festoon which massively sped up install and bump out times. The lighting designer for the event was Will Smith who described the Firefly LED Festooning as simply brilliant.

“The versatility it offers is amazing,” he continued. “I can easily string it between two points knowing I won’t need to get a ladder to add bulbs, so you can add it to so many more places previously inaccessible. We had it set up with some splitters off the connectors we have which makes it a lot more versatile in terms of feeding power to the strings. We can send three strings off one centre point on the one power supply. That’s great for when you have limited power locations.”

Firefly LED Festoon strings are made to order so you can have anything you like from 1m to 40m in one continuous string. The LED bulbs are designed to survive harsh as the shell is made from a smash proof polycarbonate material which comes in colours and a clear option which looks just like glass.