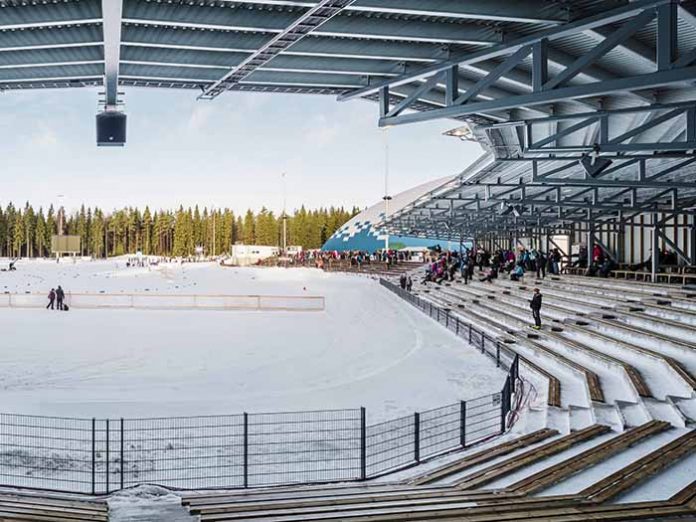 Finland’s new Imatra Stadium, located in the Ukonniemi recreation area of the city, is described “as an international standard baseball-, ski-, roller ski- and biathlon stadium” with a web of cross-country snow ski trails connected to the facility.

By relocating the former baseball stadium from the city centre and combining it with the ice rink (and the other winter sports pursuits), the city of Imatra has set a high benchmark. And with many different world-class events scheduled to take place here, a cutting edge communication infrastructure — with both state of the art audio and visual components — was essential to reflect this.

A tender document was prepared by AV consultancy, Ramboll and electrical contractors, Etec Automation enlisted the help of technology specialists Audico Systems, as according to their project manager Ilkka Hilden, the AV requirement was extremely challenging.

The product selection, Hilden said, had been relatively straightforward. “We had been using RCF P-series for many outdoor applications and knew that they are capable of handling high output and producing very high quality sound. As we are situated in Finland, and the weather conditions are quite harsh, it is a very demanding environment for speakers, and so we specified P3115-T for the audience areas and P6215 for the field, as the distances are bigger.

“As for amplification, the Powersoft Ottocanali 8K4 was also a natural choice throughout,” he continued, “since they are capable of driving both high-voltage and low-impedance speakers.

“These amps also deliver by far the best size/power ratio — not to mention the fact that they sound amazing. Finally, the price/channel ratio was really attractive which is always important when so many speaker lines are required.”

Integrated DSP was not required in this instance, as speaker processing was handled by a third party DSP device.

Henry Tapiola, from the Stadium’s development company, Imatra YH, had foreseen the difficulty in providing even sound coverage for a pair of uniform size football pitches, and both covered and uncovered seating, which would be expandable when needed. And the biggest challenge faced by Ilkka Hilden and his team, as would be expected, was finding the best way to achieve optimum intelligibility throughout the large stadium. “Also, because the speakers had to be placed in so many different locations, the delay settings had to be carefully considered. We then had to make the whole system easy to use by non-AV specialists.”

He added, “In systems like this we prefer to use Powersoft as we can rely on the fact that the sound quality will be great and that the amplifiers are simply ‘fit and forget’. We have had zero problems with these… and this is something that cannot be said often!”

Finally, Audico faced challenging time scales, since the installation had to be completed and commissioned in time to host a major skiing championship. “We were not sure whether we could get the speakers fast enough and I have to pay major respect to RCF — as those guys must have been working extra hours to make sure we got the speakers just in time!”

There are three different locations for announcements and BGM sources — and these have to be available for use at any time, and routable to any zone. The same type of sources are located in two different control rooms, and additional wireless mics are available from Reception if needed. Finally, the installation is set off with a large 60 square meters (10 x 6 meters) Absen LED screen.

Summarising the elements of the fit-out that gave him most satisfaction, Ilkka Hilden says: “I think the best part of the project was to have designed a system that perfectly suits the stadium, and that the customer was astounded at just how easy it is to operate. The level of clarity and intelligibility from the public address system is extremely good and we have received lots of excellent feedback from it.”

Henry Tapiola also confirmed that he had received nothing but positive feedback from visitors. “The sound is perfect for the audience in every corner of the stadium and across the entire site. Both the speech and music stand out thanks to these very modern speakers and the sound is in a different class to that which external sports facilities have previously been accustomed to previously.”