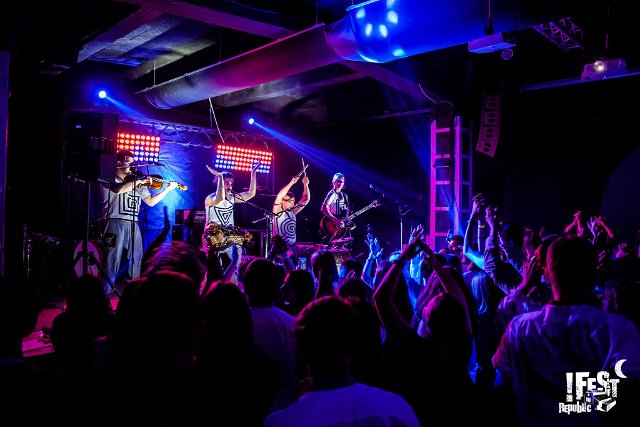 !FEST is a chain of creative restaurants, bars and clubs based in the Ukraine and its latest project is !FESTREPUBLIC.CLUB, a new nightclub in the city of Lviv. The club’s owners and management aimed to install a system to match the same quality and cultural impact as the iconic Bowery Presents Terminal 5 and Webster Hall, both of which are based in New York City. Looking to L-Acoustics, the new nightclub aimed to ensure they could offer such an all-round, world class experience through their partnership with L-Acoustics.

Converted from a former glass processing plant, the 1500 capacity nightclub has been designed as a loft-style venue, with an industrial feel and a stage for live acts at one end. The club’s owners want to ensure that the desires of visiting artists are always met but their main concern is to satisfy their guests. “I want everyone who has ears not just to hear, but also to feel,” says Andriy Khudo, co-founder of !FEST along with Yurko Nazaruk and Dmytro Gerasimov. “Music is the dialogue between artist and audience and emotions are the key to my guests`hearts. I want them to experience delight every minute of every gig and to get what they came here for.”

When the project was still in its initial stages, !FEST approached L-Acoustics Certified Provider Distributor for the Ukraine ART-R to help them deliver Andriy’s vision. “This was the first time an L-Acoustics sound system was going to be installed for day-to-day use in a nightclub in the Ukraine,” says ART-R Director Sergey Rusnak. “We have installed L-Acoustics systems in concert halls, premium karaoke clubs and restaurants where live music is performed but this was a new challenge. People come to nightclubs to have fun all night long and we knew we needed to create the right conditions for them, delivering enough SPL to give that real club feeling whilst also making sure it’s not fatiguing so that they can stay as long as they want to.”

“We used our 25 years of design and sound system installation experience for the project,” adds ART-R technical director Andrew Kotets. “But we also relied on L-Acoustics Soundvision programme and measuring equipment to ensure we got the right results.”

The system the team designed consists of eight Kara whereby two hangs of four are positioned left and right of the stage made up of eight SB18 subs, four of each ground stacked either side of the stage. In addition, nine of the new ultra-compact modular line source Kiva II as delays. “For this we needed just four amplified controllers, two LA4X and two LA8,” explains ART-S Sound Producer Alexander Stulov. “We split the SB18 into two sets of four in a cardioid configuration to avoid excess low frequency on the stage. Because the venue is a long rectangular shape and there are a lot of floor to ceiling columns running down either side of the room and so we used three delay arrays, consisting of three Kiva II each placed between the columns to give us the even coverage we needed.”

“The Kiva II is small in size and light in weight (just 14 kilograms) yet, the system possesses an incredible sound pressure and perfect coverage range and it only took two people to install it, which is an indisputable advantage of operating and renting it,” concludes Andrew Kotets. “This sound system delivers perfect, seamless coverage of the entire hall with an average sound pressure of 112dB which is ideal for a dance club. iFESTREPUBLIC.COM sets the Liviv’s audio benchmark and we are very proud of it.”