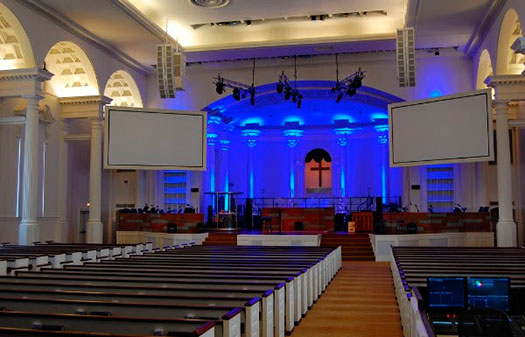 According to Allen Peerson, president of Jupiter, Florida-based Peerson Audio, which supplied and installed the L-Acoustics system, “I think my father did the original system, a single Altec Lansing multi-cell, when they built the church, and we put in the centre cluster system over 20 years ago, so it was certainly time for an update. The new system uses flown subs, as well as subs underneath the stage, so they have really good low end throughout the building, even the upper balcony. The flown subs are in a cardioid pattern, with one reversed in the array of three,” noted Allen, who also installed four 8XTi speakers for front fill. Six L-Acoustics LA4X and two LA8 amplified controllers drive the entire rig.

Peerson Audio is in the process of additionally upgrading the cameras, video screens and lighting at Family Church Downtown, which offers contemporary services with a praise band and singers.

The church also called on house of worship consultant Vance Brashears from the San Diego, California office of Idibri, formerly known as Acoustic Dimensions, to deal with other technical upgrades and some issues in the space, which is 144 ft long by 80 ft wide with a rear balcony. “It’s a fairly reverberant room, which we’ve corrected in this process with acoustic treatment,” reported Doug Lettsome, Director of Operations for Family Church, which maintains six area campuses, including Family Church Downtown.

Doug selected Kara after a day of comparative listening to four different speaker systems. “What drove the whole thing was that the church really wanted the best product we could possibly get for the amount of money we had to spend,” he said. “There’s a number of good manufacturers out there, but when you get to A/B the products side-by-side, you really hear the differences. That was indeed the case here.”

“Doug knew what he wanted but he wanted to make sure,” noted Allen. “It was a good thing we did the comparison because the difference between them was remarkable.”

“The L-Acoustics system was clearer, with more detail,” Doug described. “From top to bottom it was the most even and consistent of all the boxes. I played four music selections, pre-recorded, before we went to anything live. L-Acoustics had more articulation. There was more information there, more detail, but without being edgy sounding through the critical upper-mid vocal range-the 2-4 kHz range-where a lot of boxes fail. Cheaper boxes have distortion and edginess; you’re always trying to EQ it out, but you really can’t. L-Acoustics had none of that.”

One other critical factor was that the system had to be a good aesthetic fit, said Doug. “This is our main campus, a building that was built in the mid-1960s. It’s very traditional, with ornate columns. Kara really fit, architecturally, with what we had, and with our video screens. So it met all the criteria: it came in under our price point, it sounded the best, and we could get it in white.

“We’re very pleased with our choice, and so is our congregation. Immediately, the first week, we got responses. People said that it sounds softer, like we’d lowered the volume, but we didn’t; it’s just the impression from not having the edginess through those upper-mids. Although gain-before-feedback on the old system was decent enough, we could never get the vocals to sound very good. The new L-Acoustics system sounds fantastic.”