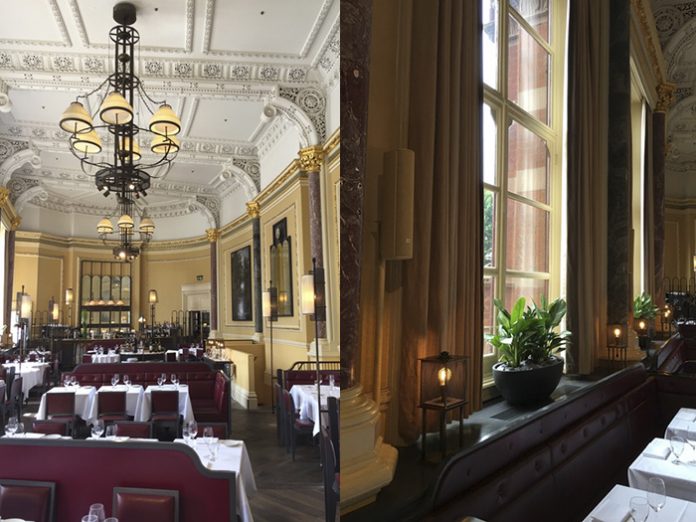 Gilbert Scott has been immortalised in the restaurant that bears his name, as part of renowned British chef, Marcus Wareing’s stable of restaurants. Formerly the original’s hotel’s Dining & Coffee Room, has been premium loudspeaker manufacturer JBL, and sound installation specialists, Evolve Install, led by Elliot Patterson.

Elliot Patterson recalled: “Other companies had been in and had suggested placing ceiling speakers in the ground and have them fire the sound upwards. But it wouldn’t have worked, as it would have caused a nuisance to those sitting next to the bulkhead. The better suggestion was to get something at high level and concentrate the sound downwards.”

Instead he suggested they visit another of Evolve Install’s sites, Galvin La Chapelle, and experience JBL’s discreet CBT Constant Beamwidth Line Array Technology. An A/B test was conducted on site at the restaurant, and whereas Galvin La Chapelle had adopted the CBT70J/JE, with the LF extender, for The Gilbert Scott the operators liked the sound of the smaller CBT50LA, with their eight 50mm drivers, to reproduce the low level classic jazz in which diners are immersed.

The four Control 50LA-1 are all mounted on free standing poles, with the cable concealed behind the bulkhead seating, which also conceals the Crown XLS402 amps, radio mic transmitter and receiver.

“It functions like a mini line array, which you can point and shoot and adjust the curvature to suit,” noted Elliot. “The coverage is perfect and the speakers ‘disappear’ into the background, thanks to the custom paint spraying. The client really loves it.”

Evolve Install also replaced the operators’ existing radio mic, which was not fit for purpose, with an AKG WMS40 Mini two-channel wireless mic system for use when the space is hired out for events. Elliot Patterson added: “Their previous radio was imported from the Far East — it was unsupported and difficult to set up. We stepped in and replaced it for an event taking place two days later.”

Commenting on the installation, Lise Mabon explained: “Evolve Install recommended us a great sound system for our restaurant. We are impressed with the speakers, they are slim and disappear in the space. Our choice of Jazz music is evenly distributed across the dining room giving it a great atmosphere with a warm, rich sound.

“Our guests have complimented the addition and our staff find it easy to regulate the sound to match different times of the day. Since fitting the Restaurant, we have asked Evolve to come back and upgrade our sound system in the adjacent bar and the results there are just as impressive.” Here the company fitted four additional JBL compact AC16.

JBL, Crown and AKG professional equipment is distributed in the UK and Ireland as part of the Harman Professional portfolio, by Sound Technology.