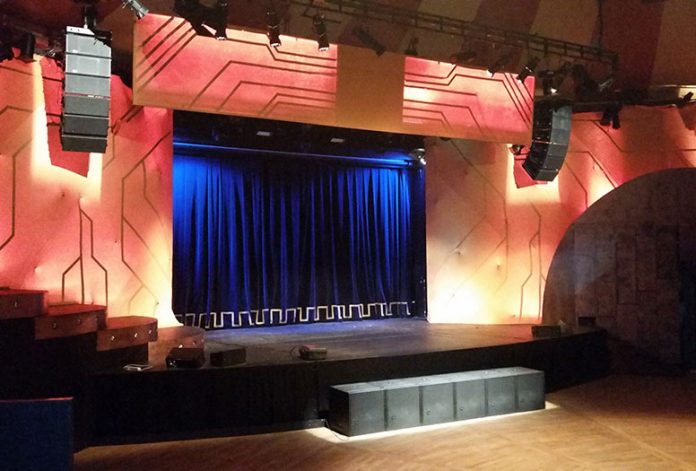 Norway is the first European country with permanent installations of the compact Meyer Sound LEOPARD linear sound reinforcement system. LEOPARD’s remarkable flexibility and versatility makes it the top choice for a whole array of differing venues.

Torgeir Aadland, Project Consultant for Audio Renovations at the Grand Hall spoke of his amazement regarding LEOPARD’s small size, but Torgeir soon found out that big things come in small packages. He stated: “It was easily one of the smallest in its class, and we had some concern about it performing to our standards. However, LEOPARD has provided excellent sound quality even at the highest levels, and gives us even horizontal coverage—it’s everything we were looking for in a new system”.

The circular Grand Hall is a central meeting place for the Student Society, an independent organisation of around 1,700 Trondheim students. It is used for concerts, cabaret theatre performances, student conferences, and other community events.

“After installation, the hall hosted the UKA festival featuring concerts, revues and standup comedy, giving the system an intensive test across different genres,” said Aadland. He continued to priase the sound quality and how events have improved from recent years, resulting with the audience experiencing even greater shows.

At the Vulkan Arena, the new LEOPARD system has already supported a number of heavy rock shows such as The Weeknd, Y&T, Acid Mothers Temple, and Wire.

Bjørn Hinkel, Technical Manager for the venue also spoke of how LEOPARD may look small, but it provides, “One helluva punch.” Corresponding comments recieved by Hinkel from bands include their first impressions of LEOPARD, which is they identify the PA to be too small, but then later on that evening, it’s all praise and applauds regarding the system.

Installed at the Grand Hall are twin arrays of six LEOPARD loudspeakers each, six 900-LFC elements, two UPQ-1P loudspeakers for front fill, and a Galileo loudspeaker management system with one Galileo 616 processor.

Both systems were provided and installed by Oslo-based Bright Norway AS, with project supervision by Trond Kristoffersen and on-site assistance at Vulkan Arena from Bright’s Stian Smith and Fredrik Frostad.