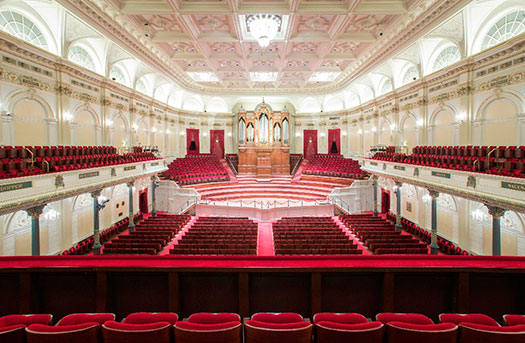 The world famous Royal Concertgebouw Concert Hall, Amsterdam, has become the latest concert hall to update its lighting system to LED, with help from ETC and their Dutch dealer Ampco Flashlight Sales.

But the decision on which fixtures to specify was not taken lightly: it took around a year of testing and discussions before deciding on 84 Desire D60XTI Studio HD fixtures, controlled by an ETC Unison Paradigm system. Flashlight Sales Lighting Sales Manager, Bas van Schelven: “In such a prestigious venue, maintaining its famously superb acoustics was a huge concern for the staff and performers. So even though the XTI fixtures were designed for external use, we specified them since they have no fans to make a noise.”

Other tests included making sure the orchestra and choir members could easily read their music sheets under an unfamiliar light; and ensuring that there would be no flicker on high definition TV cameras.

“Light output is much improved,” added Bas, “with a more even spread over the orchestra platform, compared to their previous fixtures. Users have told us that they are quite happy with these new lights over their heads.

“Music sheets are easier to read for the musicians, and TV producers have remarked on how well the new LED lights work with TV recordings and live HD streams via the website.”

Another major advantage is the reduced power consumption, coupled with lower heat output: the new fixtures, which average approximately 75W, replace eighty 575W traditional Source Four PAR luminaires. As Bas points out, the hall already feels cooler than it did with the lights on full power.

The lights are not only used during symphonic orchestra performances, but also on other types of productions, including recitals and children’s shows. “Because the ETC fixtures are capable of creating colours,” he said, “there is less need to install extra lights – so not only do they save time, they also save on rental costs.”

The managers at the hall, including technical supervisor Alfons Hutschemaekers, wanted a simple system, which now includes Paradigm serving as a master controller alongside a lighting control desk. ETC Field Project Coordinator Luke Delwiche said: “Paradigm allows basic-level control from either an existing DMX console with a handful of groups, or for full control through sACN with a visiting console. Paradigm also offers control of overall colour temperature, level-scaling and control priority, all with a custom-designed user interface.”