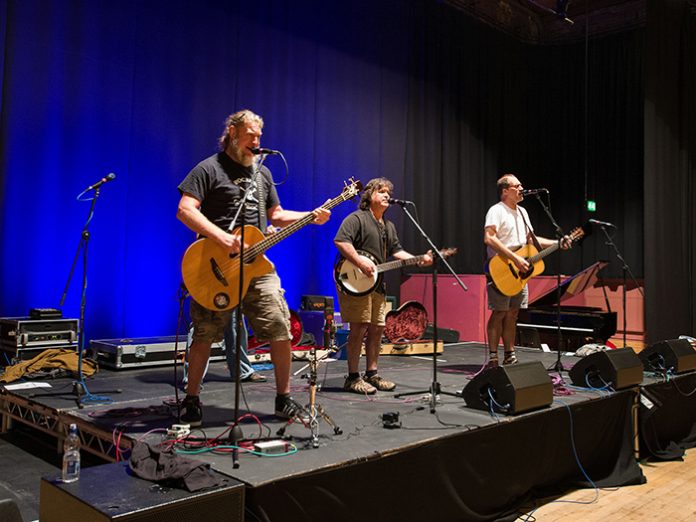 Originally built in 1772, the imposing red brick Georgian chapel in Halifax is one of only a handful of square churches ever built. Now reincarnated as the Square Chapel Arts Centre, the venue has undergone a stunning £6.6M renovation that has upgraded the existing 220-seat multi-purpose auditorium and added a versatile cinema/studio theatre space, plus a light and airy café bar, reception space and offices. Huddersfield-based systems integrator, Sound and Light Concepts, won the tender to supply, install and commission the audio and lighting equipment for the two performance spaces, both of which were equipped with sound systems from British loudspeaker manufacturer, EM Acoustics.

Tony Bottomley of Sound and Light Concepts explains that both rooms were to double as performance spaces and cinemas, both being equipped with a fully DCI-compliant (Digital Cinema Initiatives) package as well as stages. Hence, the brief for the sound systems was that they should be able to operate as a full L/C/R concert system whilst offering full 5.1 surround sound for the cinemas. That meant a system that was powerful enough for rock and roll, detailed enough for cinema and speech reinforcement, AND had to fit into the constraints of the building.

“It wasn’t an easy brief,” admitted Martin Clarke, Head of Technical and Operations at Square the Chapel Arts Centre. “However, EM Acoustics was presented as a possible option, and having heard an EM system some years ago and very much liked it, I jumped at the opportunity to hear one again. When we heard it demo’d, we really loved the warmth of the EM boxes compared to other systems. In fact, we described it as an acoustic hug – it’s like giving your ears a cuddle! We also felt that that they could deliver the diversity we need, from theatre, to live music, to cinema to the spoken word – the flexibility was very important to us. Finally – and this is so important – we could afford it. It’s no use loving something if it’s way outside your budget, otherwise it’s just a dream.”

The decision having been made to go with an EM Acoustics solution, it was then down to Tony Bottomley to design the system. “The existing auditorium was an extremely difficult space to spec as the only real option for mounting the FOH speakers was at high level,” he recalls. “This was due to the fact that the cinema screen runs virtually the full width of the auditorium. Mounting the speakers to each side of the screen would have been impossibly wide, so mounting them high – essentially above the screen – was our only option, especially as we also had to avoid sightlines.”

After several listening tests and comparisons between various models, Tony and Martin decided that the best option was a pair of EM Acoustics full range MSE-159 cabinets horizontally mounted to left and right. “If the budget had run to HALO-C, we’d have used those, but actually, the MSE-159s are an excellent compromise,” said Tony. “The rotatable waveguide means that we can mount them horizontally, and the EM Acoustics signature passive design delivers stunning sound quality. The wide 60- x 90-degree dispersion suited our requirements perfectly. We added a pair of EMS-121X compact 12” speakers for FOH centre with a pair of EMS-81Xs at the back of the hall for the rear surround sound, all supplemented with a pair of EMS-118 subs for low end reinforcement. The entire system is driven by one AQ-10 and one AD-9 for six channels of amplification.”

The Copper Auditorium system is designed on exactly the same principle except that as it is a smaller space, it uses EMS-81X cabinets for FOH L/C/R and EMS-51s for the rear supplemented by a single EMS-115 subwoofer.

Tony opted for a separate system controller due to the multi-purpose requirements of the venue. “We needed to enable non-technical FOH staff to select cinema, concert or presentation setups at the touch of a button,” he explained. “The Yamaha MRX7 processor allows you to switch between 5.1 cinema surround sound, stereo L/R sub/top concert setup, L/R with mono centre, true L/C/R or even L/R or L/C/R with rear speakers for effects depending on the application. You can also control background music levels and overall system volume using the remote wall panels. It also provides both analogue and Dante inputs so that incoming touring productions are always catered for, whatever type of desk they bring. It’s the ideal solution that optimises the functionality of a space that has to deal with everything from cinema to rock and roll.”

Martin is delighted with the final results. “The response from visiting companies is fantastic,” he said with pride. “They love to come to us now and have total confidence in the system. It actually exceeds people’s expectations, especially for theatre. It’s also going down well with the music acts, even the louder ones. We’ve had lots of nice comments about the monitors, too. People appreciate their small footprint and warm, musical sound.

“Tony and the team at Sound and Light Concepts were fantastic from start to finish,” he concludes. “In terms of the options they gave us in order to stay within budget, and the interaction with EM Acoustics – who were also extremely helpful – they worked tirelessly. I’m very grateful to Tony and all of his team for a fantastic job.”