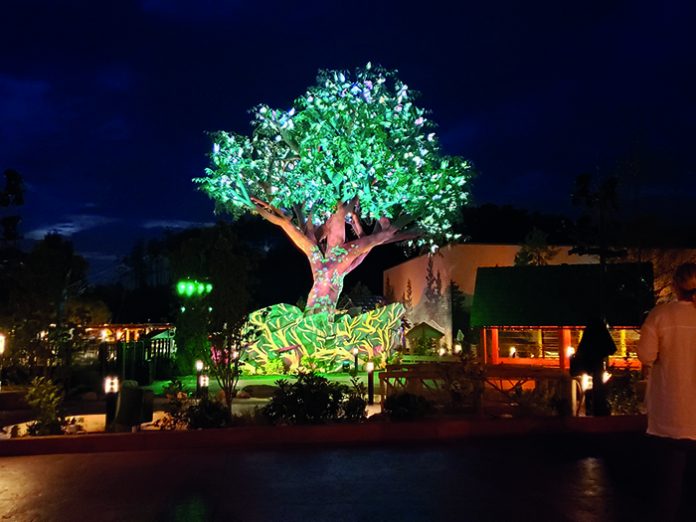 At Dollywood, the Wildwood Tree is one of its main attractions, coming to life each evening during a unique light and sound experience created by The Imagination House for Dollywood and narrated by Dolly Parton herself. Designed and built by LifeFormations, the 50-foot tree’s gnarled trunk emerges from a rock base before spreading into a beautiful green-leaf canopy covered with 650 custom RGB LED butterflies, controlled and programmed by Weigl Controls.

Lighting Designer and Lighting Programmer for four separate seasonal experiences is local resident Susan Rose. She has previously designed lighting for Dollywood shows and spent nearly a year on the Wildwood Tree project. “When I started on the project the tree didn’t even exist yet so we really started from the ground up,” Susan commented, adding that she was given a sample piece of the tree trunk to see how light would react on it. Bandit Lites also got involved in the project early on, she said, and were critical in setting up demos and helping her look at the various lighting possibilities. “I knew we needed outdoor-rated lights to fight with Mother Nature and we needed something with good intensity to shine through at dusk. Bandit recommended we go with Elation and as I was already an Elation fan and it was also in our budget range, I took a closer look.”

Each season of the year features a captivating new Wildwood Tree experience for guests with narration accompanied by music and light projection onto the tree in concert with the colour-changing butterflies. As the Wildwood Tree is a 360-degree experience, Susan positioned lighting fixtures on four poles to illuminate the tree from all four sides. Mounted on each pole – each pole is at a different throw distance – are four Proteus Maximus LED profile moving heads, four SixPar 300 LED Par lights and four LED lekos. The SixPars splash an array of colour onto the rock base, tree trunk and canopy while the 50,000-lumen Maximus units project custom gobos onto the tree to enhance story telling through custom patterns and animations.

Each Proteus Maximus fixture houses custom gobos with a few stock gobos also in use. Susan said that specific gobos play a key role in the storytelling – butterflies, lightning, dragonflies, Christmas ornaments, snow or leaves that fall down from the top of the tree – and needed to be indexed properly. A complex programming challenge, Rose says that she really had to put a lot of thought into the gobo load in the four Maximus lights. “The gobos really tell a story on this and are quite important. I really had to put some thought into which gobos go into which wheel and what slot, which ones needed to index and which ones could go on the static wheel, keeping in mind how I could create transitions.” Multiply that by four shows and you can understand the complexity. “It was probably the trickiest programming I’ve done in a long time,” she said, “but it came out nice. The crispness I could get out of the focus and zoom with the gobos was fantastic.”