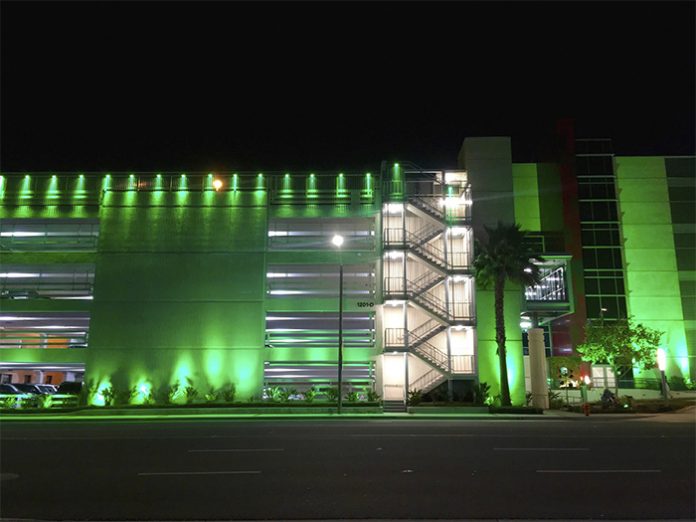 The Children’s Hospital of Orange County (CHOC) in southern California celebrated the opening of the region’s only youth mental health facility and lit the building in a brilliant wash of green – the color of mental health awareness – using Elation Professional SixPar series LED wash lights.

Event production company Pacific Coast Entertainment (PCE) was tasked with bringing the colour of mental health awareness to the entire CHOC campus. Under the direction of Jim Pari of event production company RLM, PCE used more than 300 LED lighting fixtures to bring CHOC’s vision to life. PCE designers relied heavily on Elation Professional’s SixPar line of indoor and outdoor colour-changing LED PAR lights, as well as a multitude of LED battens, to light the varied aspects of the multi-story façade.

PCE was hired to design, install, and then remove all aspects of the event. “They decided to light the entire campus to help bring awareness to the opening of the new children’s mental health wing and wanted to highlight the mental health color of green. The project called for quantity and variety in fixture selection as well as a safe and secure method for temporary installation,” said Ryan Steidinger, CEO of Pacific Coast Entertainment.

Elation Professional 6-colour SixPar 100, SixPar 200 and SixPar 300 LED PAR colour changers were used to canvas the facade of the building. “All of the lights were strategically located to be as hidden from the public view as possible, but to maximize the lighting effect on the building’s surface,” Ryan explained. “With a variety of surfaces including glass, concrete, stucco, steel, etc. we needed a versatile fixture that could maintain a consistent color green and have a variety of output options. We used the vibrant green straight from the SixPar’s LED diode; no other colors were mixed in.”

The fact that each SixPar model fixture is available in a weatherproof IP65 and IP20 versions as well as the variety of output choices available were important factors in their choice, according to Ryan. “This gave us maximum choice as we deployed the various units around the campus.”