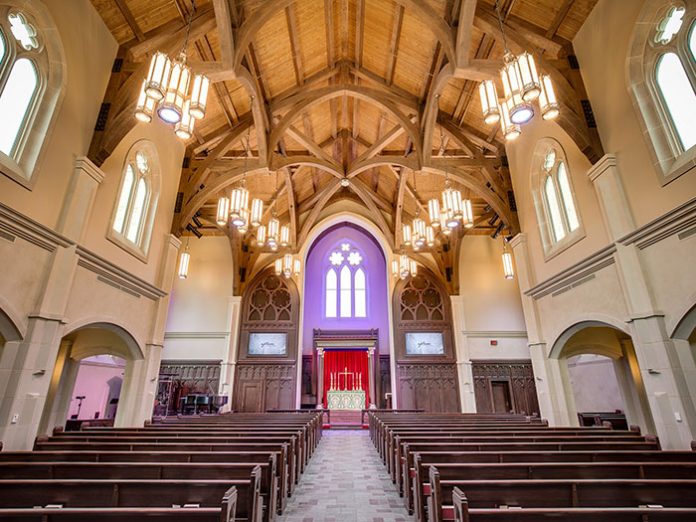 The Episcopal Church had a number of requirements for the new system. It needed to be heard but not seen, flexible enough to handle a variation of music genres, and because it is a highly reverberant space, the sound needed to stay off the walls to aid vocal intelligibility.

To handle the challenge, church leadership called up the Dallas-based system design group Idibri, who quickly assigned consultant Ryan Knox to the job.

Ryan explained how the church is a gothic looking, long narrow room with traditional high ceilings and a slightly cruciform design, which meant that aesthetics were a priority. They had two insets to the left and right of the altar for sound reinforcement purposes, which they hoped would accommodate a contemporary sound system that could handle full range music, which was admittedly a difficult task.

Fortunately, EAW had recently introduced Anya, a complete, self-contained, high-power sound reinforcement system that adapts all performance parameters electronically. In addition, columns of Anya modules hang straight, without any vertical splay, uniquely allowing them to fit in the limited space set aside for loudspeakers.

Ryan added that he and his team specified two Anya modules for each array for two reasons: they thought that would be more than enough system for the room and also because they fit in the space allocated for loudspeakers. However, it would Anya that solved a lot of problems from a design perspective and from the audio perspective. Ryan used EAW’s Resolution 2 software to produce asymmetrical output that delivers coherent, full-range frequency response across the entire coverage area.

Each Anya module includes fourteen 1-in exit / 35mm voice coil HF compression drivers loaded on a proprietary HF horn that expands to fill nearly the entire face of the enclosure. Six 5-in MF cone transducers arranged in two columns of three, use Radial Phase Plugs and Concentric Summation Array technology to enter the horn and sum coherently with the HF wavefront. Dual 15-in LF cone transducers use Off-Center Aperture loading to increase the spacing of the apparent acoustical centres, extending effective horizontal pattern control well into the LF range.

Ryan concluded with the following: “I was really pleased that when we went to tune the system, it required very little work beyond configuring the Resolution 2 software. On our first pass it was 90% of the way there – tweaked it a bit and we were set. The results match exactly what the modelling said it would.”

For this challenging application where aesthetics and acoustic performance were critical, Anya offered a compelling value.  Needless to say, the church is extremely pleased with the result.