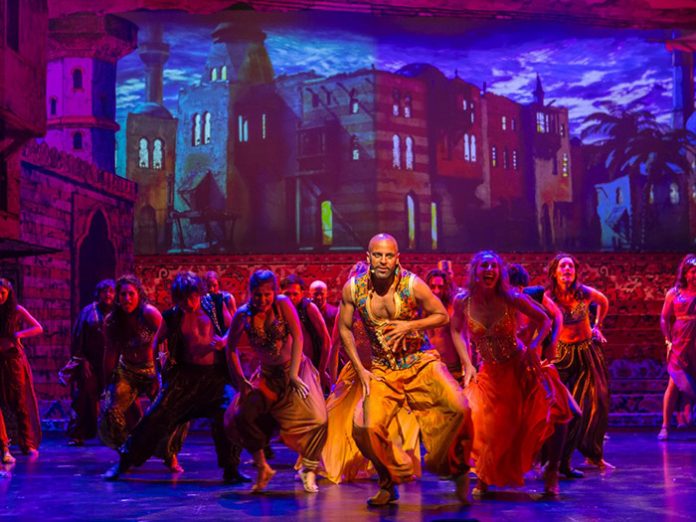 Deployed immediately, the Titan Super Quad projected imagery and words onto the main curtain for the musical world premiere of Der Medicus. Staged in Fulda, the town celebrated as the leading centre for German musical productions, Der Medicus is the German adaptation of Noah Gordon’s international best seller, The Physician.

The two Digital Projection E-Vision Laser 8500 were positioned side by side and precision edge blended – a standard feature of the model – to project content created by Czech video designer, Petr Hloušek, onto the front of the 13m x 5m opera foil.

The projection system was such a success; it has been assured a permanent position. Spotlight’s latest production, Treasure Island, has also benefitted from the newly discovered design versatility. The Titan Super Quad powerful 3-chip projector is once again in place to illuminate and illustrate the front of the main curtain, as well as onto a half circular screen with a 6-metre diameter through the performance.

Delivering an impressive 20,000 lumens output, the Titan Super Quad offers the best performance on the market today in every significant area: Weighing in at just under 40kg, it is 60kg lighter than some of its closest competitors and at least 40% smaller than any other comparable projector. As the brightest projector of this size, with four long life lamps, the Titan Super Quad is also the quietest projector in its class available on the market.

Outside of the great performances of both projectors, Spotlight also appreciated the advantages of the E-Vision Laser 8500, praising in particular the benefits of the solid-state laser phosphor light source, which means that virtually no maintenance is required. The fact that the projector boasts a 5 year/20,000 warranty gave extra peace of mind.

Maik Walter, Spotlight’s technical director, commented, “The projection was an immediate success and presented no challenges to us. We chose these models from Digital Projection because we wanted a cost-effective solution for versatile, large-scale and high quality projection of imagery. We have all this and more and we also have received the most wonderful service from both ETHA and Digital Projection. We – and our customer – could not be happier.”