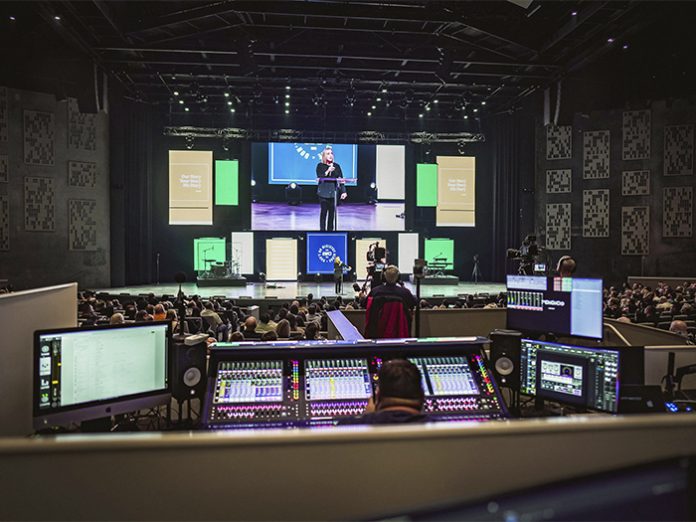 Seacoast Church is recognised as a pioneer in the field of church propagation, with a dozen physical locations in South Carolina and one in North Carolina, as well as its online presence reflecting its status as one of the largest churches in the Eastern United States. Over 10,000 worshipers attend weekly, where Greg Surratt continues to serve as Founding and Teaching Pastor while his son Josh Surratt serves as Lead Pastor.

Seacoast Church has been equally forward looking when it comes to worship technology, and that’s evident in the recent implementation of a new DiGiCo Quantum338 console at front of house for the church’s main and broadcast location in Mount Pleasant, South Carolina that seats 2,500. In addition, a new DiGiCo Quantum225 console is on order for the campus’ 1,300-seat Student Center auditorium, with a third future Quantum225 planned for the church’s 800-seat Warehouse space.

The new FOH Quantum338 is complemented with a pair of SD-Racks for a total of 96 inputs and 48 analog outputs, with 32-bit “Ultimate Stadius” microphone pre-amps. All of the DiGiCo desks will also be fitted with DMI-KLANG and DMI-Dante cards to support the church’s Shure PSM 1000 and 900 IEM monitoring systems and planned-for connectivity throughout the campus, respectively.

“The sonic experience is very important at Seacoast Church,” says Preston Russ, Director of Design at WAVE, the Concord, North Carolina-based design and integration firm that installed the DiGiCo products. “The music is Contemporary Christian and high energy, so the sound has to be great. DiGiCo assures that.”

As important, though, was the desire to create a new and future-proof workflow ecosystem at the church, one that would start at the Mount Pleasant location, which also serves as the main broadcast site, and would be able to rolled out throughout the Seacoast community of church plants.

“As important as the sound quality was, they were also looking for ease of use, reliability, and stability,” said Preston. “The Quantum technology gives them all of that. These were the first DiGiCo consoles they’ve used, but Mike Ward, their main mix engineer, has had a lot of experience with DiGiCo and he was already very comfortable with the idea of using them. And Brandon Lake, who is one of their worship pastors, is very forward-looking when it comes to technology, and he was impressed with the kind of ecosystem that could be built there.”

Ward, Seacoast Church’s Production Director, was sold on DiGiCo well before he came to the church nearly three years ago. “There is literally no other console I’d rather mix on,” he says. However, he added, the new console acquisitions are highly strategic. “The goal is to have unified console platforms and software in all three of the worship spaces on the campus,” he said.

“That way, our musicians can be familiar and comfortable with the same monitoring in every room, our mixers can also be familiar and comfortable using the same worksurfaces and workflow in every space, and they’ll be able to take and use show files and channel strips from room to room, which will give us workflow and sound-quality consistency throughout the entire campus. The Quantum consoles and software are really the basis for an entire new audio ecosystem for Mount Pleasant and beyond.”

The DiGiCo decision has already produced economic benefits: Preston says that the implementation of the DMI-KLANG card and the 16 discrete stereo mixes it offers for their Shure IEM system meant that the church could do without the dedicated monitor console it had been using. But as has always been the case with Seacoast Church, the future is the real goal.

“The MADI capabilities of the Quantum technology will play a big part in how the DiGiCo ecosystem migrates throughout the rest of the church and the other locations,” says Preston. “There will be splits from the Quantum338 to recording and other uses in the future, and we’ll be able to add an Orange Box, more Dante, and other components as well. This will be the hub of a much larger and very efficient audio-production environment that can take the church into the future.”