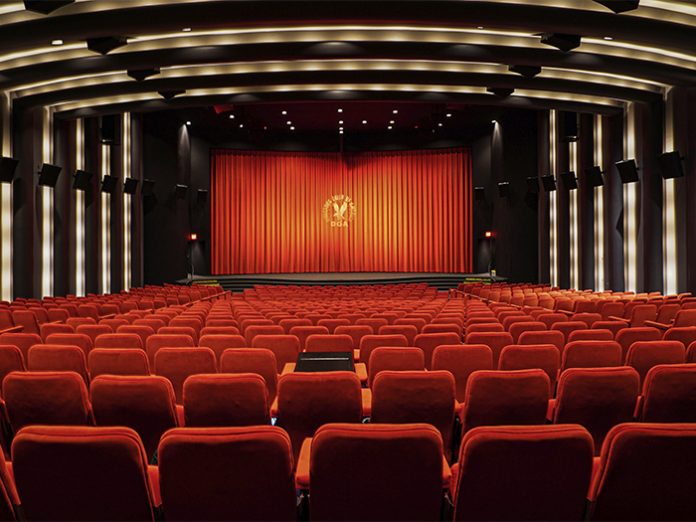 The Directors Guild of America recently completed a total renovation of its flagship motion picture exhibition space at the prestigious DGA Theater in Los Angeles. Guided by a Guild committee of six leading filmmakers, the renewal project has moved the 600-seat theatre to the forefront of cinema technology with installation of custom-built Dolby Vision laser projection and a Dolby Atmos immersive sound system encompassing more than 70 Meyer Sound cinema loudspeakers.

From the outset, explains Tom, the committee had insisted on the absolute highest level of audio reproduction. “We first measured the acoustics of the room, but this element was well done with the original design. Background noise and reverberation both were well within standards. So the critical factor came down to loudspeaker selection.”

Drawing on their unique perspectives as filmmakers, the Guild committee members insisted on a live audition in order to make a final decision. “When the speaker system decision was going to be made, we decided that, no, we’re not going to decide this just on the printed specs,” recalled one committee member, director Michael Mann, in a recent DGA interview. “We wanted the systems set up for an audition. We wanted to hear how they would sound as we moved around the space.”

Meyer Sound and one other maker brought in front screen channel systems for a comparative listening session attended by Mann and another key member of the committee, director Michael Apted. Each system was tuned by manufacturer representatives for peak performance. The Dolby representatives consulted with the DGA team in selecting a broad range of licensed soundtrack excerpts to evaluate dialogue clarity, effects impact, and musicality.

“Everyone coalesced around similar impressions,” recalled Tom. “On a fair chunk of content it was difficult to say one was clearly better than the other. Each system had its relative strengths, but on a greater portion of the overall content the Meyer Sound system was judged to be superior.”

Explained Michael Mann, “Both systems were technically spot on, but Michael Apted and I picked the Meyer Sound system because of a difference in emotional musicality. You can listen to two or three sound systems and, even though they are technically very close, one sounds emotionally more musical than another. These are the kinds of decisions any of us on the committee would make if they were being made on a film. It was great to be able to think and execute the same way in designing how the film is exhibited.”

Integration and installation of all audio and video systems was contracted to Diversified’s Media & Entertainment group under the guidance of Director of Engineering Adam Salkin and Project Manager Eugene Tuzkov.

“Typically it means that the cable going to the loudspeakers can be thinner,” he noted, “as you need not be concerned with running heavy-duty speaker cable. That’s the biggest advantage. But it also means we don’t have to be concerned with variations in cable distances. In this case we have equipment racks behind the screens, and if we were running cable to passive speaker all the way in the back we would have to account for high-frequency rolloff. Also, with self-powered systems the amplifiers are built in and matched to the drivers, and you have true bi-amplified systems, you get better sound quality.”

Other members of the DGA’s supervisory committee were directors Christopher Nolan, Jon Favreau, Betty Thomas and Shawn Levy. Overall guidance of the project was driven by DGA National Executive Director Russ Hollander and two executives from his team, Marcel Giacusa and Tim Webber.