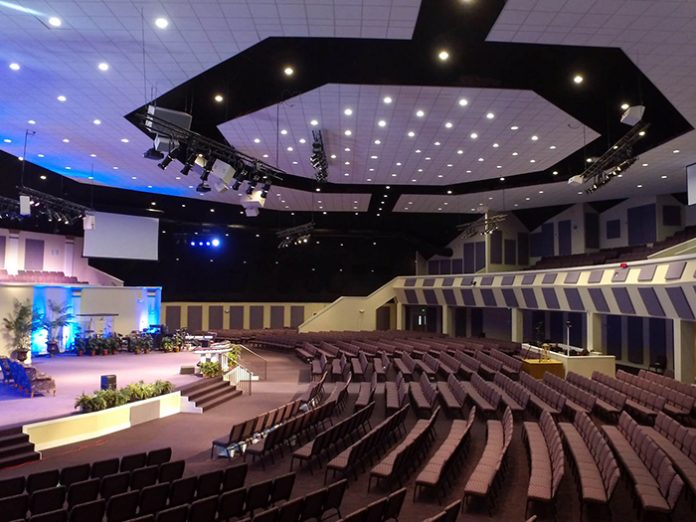 In its 35-year history, Fellowship Bible Baptist Church has grown from its founding by the late Pastor Willie L. Reid, Sr. and a handful of dedicated members to a 3,000-strong congregation that today forms the spiritual bedrock of Warner Robins, Georgia.

Along the way, FBBC moved into or constructed sanctuaries of ever-greater capacity for its contemporary-style services, culminating in 2007 with a 1,200-seat sanctuary in a majestic, dome-shaped building. As amazing as it is to look at however, the dome was something of an acoustical nightmare that routinely created surreal reflections and wreaked havoc with intelligibility. Half-measures and a growing collection of loudspeakers only complicated the acoustical chaos until dB Audio & Video, of Gainesville, Georgia, recently went in and implemented scientifically-based acoustical treatments and a well-behaved Danley Sound Labs loudspeaker and subwoofer array. dB also installed new production lighting and HD broadcast video systems.

“We used to get a lot of complaints from members and visitors about our sound system before the renovations by dB Audio & Video,” said Kimberly Lake, media director at FBBC. “There was too much echo throughout the sanctuary and members had a hard time understanding anyone talking on the mic – including our pastor – and members couldn’t understand our choir.” Phillip Rhodes, who managed the project for FBBC, added, “Things were super uneven. I could be sitting and hearing things clearly enough, but my neighbour might not understand a single word! dB’s initial measurements suggested the reverb time was near six seconds and that the reflected sound was often louder than the direct sound.” In a nutshell, the dome was acting like a parabolic mirror that reflected sound in all manner of problematic directions.

“This isn’t the first time I’ve seen relatively new construction in which acoustical treatment and proper sound system design, which necessarily come later in the process, get short-changed due to budget concerns,” said Bill Johnson, engineer at dB Audio & Video. “The approach the church was sold was to carpet bomb the sanctuary with loudspeakers. But with a parabolic dome, that’s a recipe for disaster. The reflections really dominated the sound, and more loudspeakers just led to more (and more confused) reflections. Apart from the difficultly of hearing components of a service, you couldn’t hold a conversation at more than fifteen feet!”

Johnson began his work at FBBC by shooting impulse response measurements at a dozen locations around the sanctuary, which, together with a representation of the sanctuary in Bose Modeler, informed his plan for acoustical treatments and loudspeaker placement. “Our first approach was to knock 1.5 seconds off the reverb time by placing r30 and r32 absorbent material above their ceiling clouds, which, ironically, didn’t have any absorptive properties on their own,” explained Johnson. “Next, we treated the walls with 2×2 and 2×4 black panels that went up in three rows. At the top, the wall wrapping the dome ceiling started at fifteen to twenty feet up. Next we covered the bull nose that circles the room, and finally we covered the perpendicular walls that connected the bull nose to the floor.” In all, dB installed 155 acoustical panels.

The acoustical treatments took about a week to install. Video and audio pre-rigging occupied the second week, and lighting occupied the third. “Not even halfway through the acoustical treatment installation, the Fellowship staff were impressed by the improvement,” Johnson said. “I think it’s important for people to hear improvements at different stages of the process. It goes a long way toward countering the notion folks have that a new mixing console can fix everything!”

As important as the acoustical improvements to FBBC were, it was still critical to keep direct sound energy on the listeners’ ears and off the walls and ceiling as much as possible. Danley Sound Labs’ legendary pattern control and efficiency would prove invaluable for meeting that objective. Just three Danley SH-96 loudspeakers provide main coverage, each with a Danley SH-95 for down fill. Three more SH-95s cover the balcony on delay, two Danley SM-80s provide corner fill, and two SH-60s provide mid-stage fill. All of the instrumentalists are on in-ear monitors, but the vocalists and speakers use the SH-60s. Johnson took advantage of cavities under the stage to install two Danley TH-118 subwoofers.

In addition to the new sound system and acoustical treatments, dB Audio & Video installed new HD video systems and infrastructures. “We wanted to give the church the ability to easily create a dynamic and engaging visual experience while at the same time keeping it volunteer friendly using a small number of personnel,” explained John Hogg, broadcast systems engineer with dB. The IMAG upgrades included two new Panasonic PT-RW630 laser projectors for congregational viewing and one Panasonic PT-DX500 for choir/stage viewing. The HD camera upgrades included three Panasonic AW-HE130 Robotic cameras and a single Panasonic Studio manned camera for capturing the pastor. One Panasonic HE40 Robotic camera was designed for congregational and baptistery shots, and three movable POV cameras were used for close up interest shots for a total of eight live camera shots. A new broadcast video control room was designed and included a two-channel ClearComm communications system, studio furniture, and an alpha channel graphics package utilising a new iMac running ProPresenter 6 software with an Ultra Studio 4K interface for perfect lower thirds graphics. A new 2 ME broadcast switcher, 40×40 HDSDI router, HD streaming, HD capture, and a new HD modulated digital signage system completed the HD system upgrades. In addition to projecting camera images of the service for those sitting in the balcony or back of the sanctuary, FBBC uses the camera images to compile DVD videos and web streaming for homebound convalescents.

Finally, a comprehensive lighting system upgrade rounded out FBBC’s new AVL package. McRee Electric upgraded the house electrical systems in coordination with dB Audio & Video’s lighting designers. Many of the client’s existing traditional PAR’s and ellipsoidals were able to be re-purposed into the new design which included twelve new Chauvet SlimPAR Quad LED lights for side fill and stage mood, plus a number of new Leviton ellipsoidals to create an even lighting palette for broadcast. A new ETC SmartFade ML lighting controller was installed to program and control the new lighting system.

“Since our renovations, we have heard nothing but compliments and praise about our new sound system,” reported Lake. “Members now enjoy our services from start to finish and walk away satisfied with their worship experience.” Rhodes added, “You wouldn’t say it’s the best-sounding system in the world – that’s just not possible in this room. But it does sound really good, and no one complains about intelligibility any more. Nothing is distracting or annoying and that is a massive improvement.”