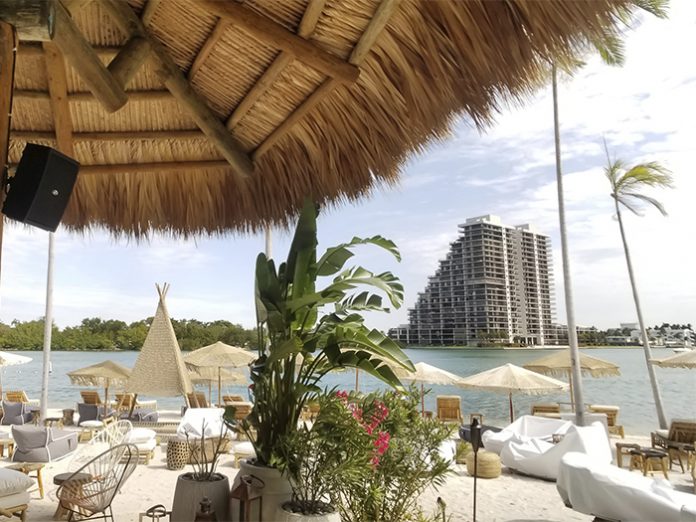 Located on a hidden beach oasis at the west side of Miami’s Jungle Island, the new Joia Beach Restaurant & Beach Club resides underneath a large beach palapa inspired by the restaurants and hotels in Tulum, Mexico and Mykonos Island in the Cyclades of Greece. The concept is completely open, and guests can enjoy the true feeling of dining al fresco. This new upscale venue has a vibe all its own—thanks in large part to a sound system consisting of WR, Quantum, Altea, and Factor 8 loudspeaker systems drawn from the catalogue of Valencia, Spain-based DAS Audio.

Consisting of a main restaurant, a Front of House station for the DJ, and an exterior bar area, the sound setup at Joia Beach Restaurant & Beach Club was designed and implemented by John Fiorito, DAS Audio of America’s Lead Design and Installation Manager for Nightlife and Hospitality. Fiorito discussed the project and his choice of loudspeakers for the various areas throughout the venue.

“The entire venue has its own media server for its regular source of music, John explained. “This capability is augmented by a DJ booth that has the capability to feed the primary restaurant system an alternate music source. In the main restaurant area, we deployed a combination of ten DAS Quantum Q-43-T 1-way, full range loudspeaker enclosures configured in stereo, which are augmented by six Quantum Q-10 subwoofers in mono. This combination ensures high fidelity and true stereo imaging with solid low end punch that covers the area with rich, detailed sound.”

“The Front of House PA setup for the DJ is configured as mono point source and consists of four DAS WR-8826 2-way point source enclosures augmented by four DAS WR-151S subwoofers” John continued. “This station also has the capability to feed an alternate music source to the restaurant area by way of an easy connection using a stereo mini cable. For the exterior bar area, we installed four DAS Factor 8 2-way, vented loudspeakers in a mono configuration along with a DAS Altea-412A 2-way powered point source enclosure that serves as the DJ monitor.”

Working in close coordination with Fiorito was Emma Batchelder, the Marketing Manager for the Joia Beach Restaurant & Beach Club. Overseeing the venue’s marketing and brand management, public relations, and creative direction responsibilities, she reports being very impressed with DAS Audio of America’s handling of the project, “John and his entire team at DAS Audio have been nothing short of amazing. They have delivered a world-class product that anyone would be incredibly proud of. Their consistent and continuous support is hugely appreciated—particularly in the fast-paced hospitality industry.”

The DAS Audio sound reinforcement system at Joia Beach Restaurant & Beach Club was installed during February. With the venue on the verge of opening its doors for business, Batchelder summarized her experience with the project, “Music is our heartbeat at Joia Beach, and DAS Audio has exceeded our expectations on every level, which is why we continue to work together on projects past, present, and future. We can’t wait to open our doors to Miami and share a product that both Joia Beach and DAS Audio can be incredibly proud of.”