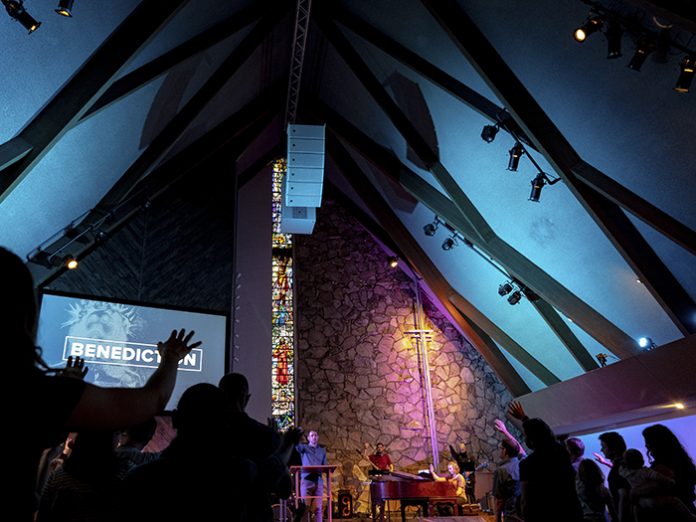 Emmaus Church is a Christian house of worship with a contemporary approach to engaging their congregation. In addition to spoken dialogue, the music assumes an integral role in their services. To ensure the utmost clarity and natural sound reproduction possible, church management recently elected to upgrade their sound reinforcement system—with the result being a setup drawn from the Artec Series catalogue of Valencia, Spain-based DAS Audio.

Props AV, an AV design/build firm that also has a live events production division, was contracted to design and deploy the church’s new sound system. Michael Betancourt, the company’s General Manager and member of Emmaus Church, ultimately deployed a system consisting of DAS Artec 320 installation line array elements augmented by Artec 322S subwoofers for the low frequency, along with two Artec 306 passive point source enclosures. All loudspeakers are painted white to seamlessly blend in with the sanctuary’s aesthetics. He discussed the project.

“For this audio system upgrade,” Michael explained, “we elected to fly a centre mono cluster of six Artec 320 loudspeakers over the altar/stage area. These enclosures are supported by three Artec 322S subwoofers flown directly behind the Artec 320s with the middle sub being in a cardioid position to reduce the low-end sound pressure at the altar. Additionally, the sanctuary has a ‘wing’ area off to the left as you face the stage. To ensure coverage here, we placed two Artec 306 loudspeakers. For amplification, we used a single DAS DX-80i 4-channel power amp to drive the centre cluster and the subwoofers. We also used a DAS IA-402 stereo power amp to drive the two Artec 306 loudspeakers.”

When asked about those attributes that made the DAS Audio equipment the ideal choice for this installation, Michael offered the following: “First and foremost was the Artec Series’ excellent sound quality for both music reproduction and speech intelligibility. Secondly, the dispersion characteristics of these loudspeakers made for a nice directional sound—eliminating the need for any sound treatments to reduce echo. Further, the compact size of the enclosures made for a very clean installation that doesn’t distract while flying the subs kept the alter area clean of any obstruction or from overpowering the first few rows with low-end.”

The new sound system at Emmaus Church was installed during April 2019 and its ‘premiere’ performance occurred on Good Friday. Since that time, Betancourt reports the system is exceeding all expectations. “The new DAS system’s performance is so much better than before. It’s an unbelievable difference. Lead Pastor Forrest Short agreed: “I can say with confidence the new sound system has helped us become more effective in our mission. It delivers a clarity and focus to our worship gatherings in a way that has been broadly experienced by our congregation. I am happy to say it has met and exceeded my hopes.”