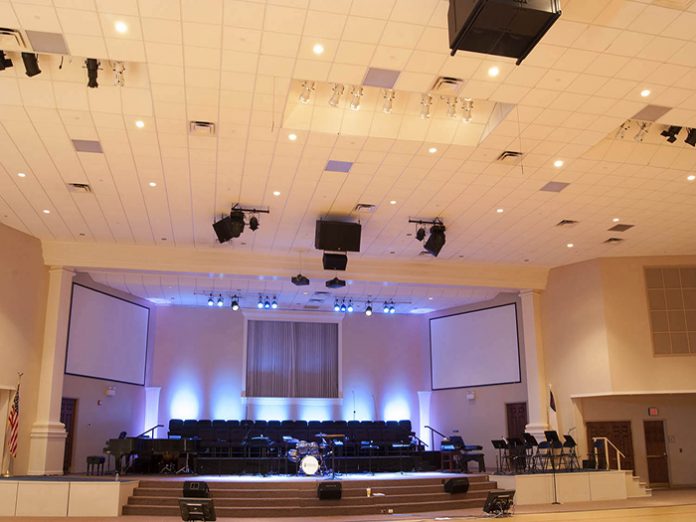 “We did Fayetteville First Baptist Church’s previous sound reinforcement system when I first started at dB Integrations fifteen years ago,” said Neil Philpott, sales consultant at dB Integrations. “We designed that system for a multi-purpose room because, like many churches, they hoped to build a dedicated sanctuary. But that never ended up happening and so the ‘multi-purpose room’ became the permanent worship space.”

He continued: “With their new emphasis on blended worship, they wanted a system with greater dynamics, better intelligibility, and more enveloping musicality. Their production director, Luke Drewry had attended several of our educational seminars and understood the dimensions along which their previous system was falling short. Other firms suggested line array solutions, but in the years since I first worked with FFBC, Danley Sound Labs came into existence. Danley’s patented technologies offer vastly better performance than line arrays: better pattern control, better phase coherence, and better intelligibility and musicality overall.”

To offer proof of concept, dB Integrations arranged a demo of the major components Philpott proposed for FFBC. They placed a Danley SH-96 point-source loudspeaker and two Danley TH-115 subwoofers on a lift and covered 75% of the room. “It sounded awesome, and by the time we got back to the office from the demo, they were calling to say, ‘Let’s do it!’,” Philpott said.

Indeed, the now-installed system uses a single Danley SH-96 to cover the majority of the room, augmented by a Danley SH-95 for down-fill and two Danley SM-60s for side-fill. In addition, the church purchased a pair of Danley TH-115 subwoofers a few years ago. Philpott and his team removed them from the organ niche where they had been placed and mounted them on the ceiling in the middle of the room, coupled so as to provide more efficient directivity. Two years previously, dB Integrations added acoustic treatment to the side walls to reduce flutter echoes. Crown XTi-Series amplifiers power the system, and a BiAmp Nexia handles signal processing.

Unfortunately, the FFBC’s mix position is in a crow’s nest that falls outside the pattern of the room’s main Danley SH-96. dB installed a Danley SM-100 loudspeaker to cover the mix position, using the DSP to appropriately delay and band-limit its output. “That’s another advantage of Danley’s horn-based design,” he said. “Other manufacturer’s boxes are out of phase even with their own output, but Danley doesn’t have that problem. Every Danley box is a completely in-phase product. That makes it possible to match one Danley box with the characteristics of the larger Danley system. Even within the beam width of a Danley box, not much changes until you exit the beam. That made it possible to match the SM-100 for the mix position to reflect the tonality of the larger system.”