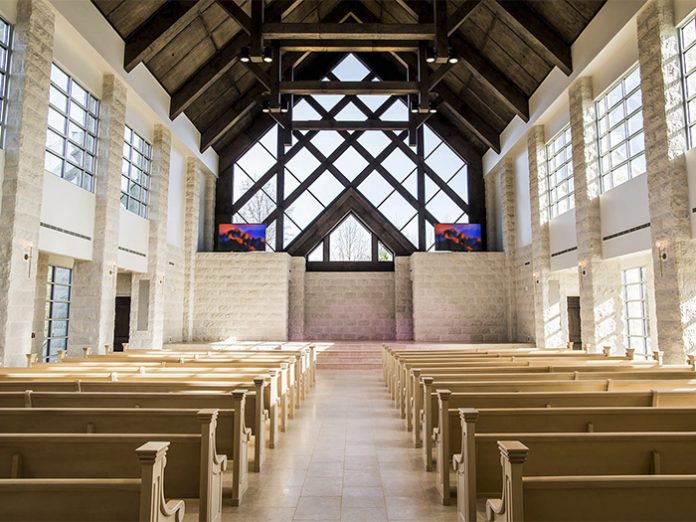 “The Chapel on McEver is a beautiful setting for a wedding, but its aesthetic also makes for some challenging acoustic conditions,” explained Paul Lynch, inside sales associate at dB Integrations.

“There’s imported marble tile everywhere plus lots of glass and highly reverberant wooden pews. To compound the challenge, the church put off some acoustical treatments we recommended while also requesting that the sound system be invisible. They don’t want to see technology in the room. With very few places to even put a loudspeaker, Danley’s point-source fidelity and intelligibility were going to have to save the day.”

The columns include niches for form-factor loudspeakers, so dB Integrations opted for Danley’s “Skinny Big Horn” series. A Danley SBH-Series loudspeaker acts as a single point source while delivering a wide horizontal coverage pattern and a tight vertical pattern to keep energy off the ceiling and floor. When the recommended acoustic treatments were still on the table, the dB Integrations design team has created the system with four Danley SBH-20LF columns – the “LF” denoting additional low-frequency drivers.

However, they have revised the design to six Danley SBH-20 columns, four for the main floor and two for the balcony. The additional boxes serve as delays so as to minimize the distance between a given listener and a loudspeaker. Finally, two Danley TH-mini15 subwoofers contribute low-end warmth for musical playback.

The dB Integrations team used four weatherised Danley GO-2-8CX loudspeakers for an outdoor patio area that’s suitable as a pre-wedding hangout or as part of a post-wedding reception. The grounds also feature a “garage” area that is semi-indoor and outdoor. Four more Danley GO-2-8CXs cover the garage, with low-end support from another Danley TH-mini15 subwoofer.

Finally, two Danley SM-100 Synergy Horn loudspeakers serve as a portable system. Crown amplifiers power all of the Danley boxes, and a QSC Q-Sys DSP system provides comprehensive routing so that users can place any sound source in any area with minimal fuss.

“Danley fidelity is a big part of the Chapel on McEver,” Paul concluded. “The sanctuary itself is far from perfect – not only is the room extremely reflective, but we couldn’t even angle the SBH-20s for ideal coverage. Nevertheless, it’s pretty darn good: listeners can understand what’s being said! With conventional column loudspeakers, things would be unacceptable. The outbuildings all benefit from Danley’s musical impact, as well.”