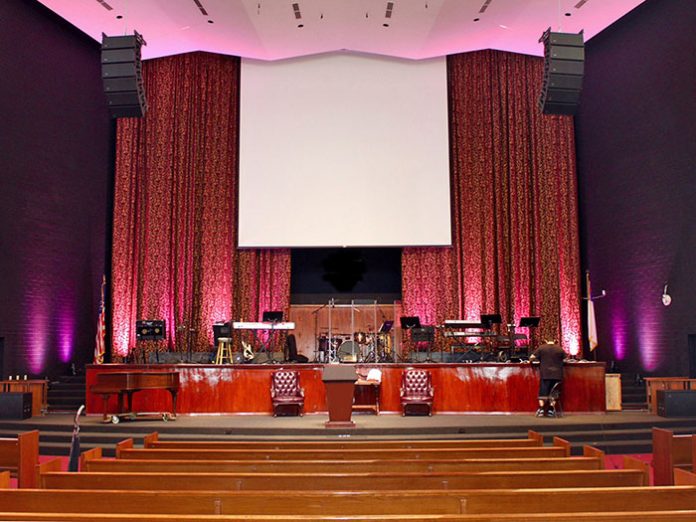 La Familia de Dios, a Christian church located on North Euclid Avenue, Ontario CA, has recently upgraded its sound reinforcement system with loudspeakers from Spain-based D.A.S. Audio, to ensure its teachings are clear and the music performances are vibrant.

Linear Production of Corona, CA was contacted to handle the installation of the church’s new sound system. Sean Sheridan, who serves as the company’s Owner, System Designer, and Project Manager, ultimately selected 12 D.A.S. Audio Event 208A 3-way active line array elements, two Event 218A high performance powered subwoofers, and a DSP-4080 stereo / mono processor for loudspeaker management. He discussed the project and his reasons for choosing the Event Series loudspeakers.

“La Familia de Dios has both traditional and contemporary services,” Sean explained, “and because of this, it was critically important that both the speech intelligibility and music reproduction characteristics of the new sound system were first rate. Music plays a very important role in their services. They have a praise band that really gets people into the spirit of the moment and so we wanted to ensure the music really came across the way it should.”

The sound reinforcement system deployed by Sean and his crew consists of 12 D.A.S. Event 208A line arrays – flown six elements per side over the right and left front edges of the stage area. These clusters are spaced 40 ft apart and are flown at a height of 28 ft. The distance from the two line array clusters to the back wall of the sanctuary is 96 ft. The space accommodates 850 worshippers between the main floor and the rear balcony. Seating is in the form of traditional fixed pews.

For low frequency support, the Linear Production team deployed two D.A.S. Event 218A active subwoofers. These enclosures are placed one each on the left and right edges of the stage. The Event 218A sub bass enclosure incorporates dual 18-inch transducers with four-inch voice coils and the enclosure employs a front loaded bass reflex configuration. Rounding out the system, Sheridan utilised a DSP-4080 processor for loudspeaker management. This unit features nine full bandwidth parametric EQ bands that are available on every output and crossover filters on each output offer 48 dB/oct response.

When queried about those attributes that made the D.A.S. Audio Event Series loudspeakers the ideal system for this project, Sean said: “The Event208A’s have even coverage vertically from the top of the balcony to the floor seating area.

“In terms of their horizontal dispersion, you can hear both line arrays across the room – providing a true stereo sound but still enough control to keep the energy off the walls. The Event 208A is a very even sounding speaker throughout the frequency range. The throw is great for a dual eight-inch line array. Equally noteworthy, the system’s integrated rigging hardware is well designed and very easy to use. These loudspeakers are very predictable and consistent, which is what you want from a line array.”

La Familia de Dios’ new sound reinforcement system was installed during April 2015 and placed into service at the start of May. Since that time, Sean reports the equipment is being very well received. “The church is super happy with the sound and characteristics of the system. You can hear every word clearly from any seat in the room and, musically, it delivers a warm and punchy sound. This project has been a win-win for everyone involved.”