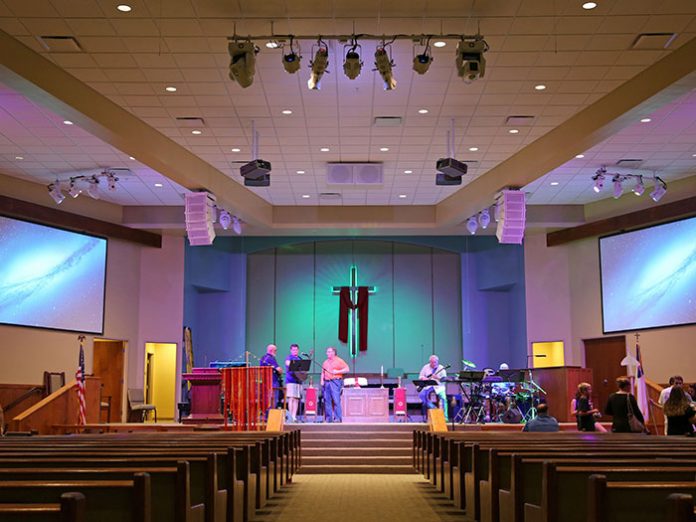 Creative Sound and Lighting Solutions of Cape Coral, FL, an AV installation company that is primarily focused on the House of Worship market, was contracted to design the system and deploy the new equipment. After meeting with church management to ascertain their goals and objectives, the team decided to repurpose the church’s two existing Eiki LC-XL200 LCD projectors while expanding their projection capabilities with the addition of the two new LC-HDT700 units.

Rob Robinson, Creative Sound and Lighting Solutions’ system designer, discussed the project: “Cypress Lake United Methodist Church is now using a total of five projectors in their sanctuary. In order to create some atmosphere that would complement the worship experience, the existing Eiki LC-XL200 LCD projectors have had their output re-directed to the rear wall and now provide environmental projection. With the aid of computers, these projectors are now providing composite images from the output of the PCs to enhance the environment.

“The new Eiki LC-HDT700 projectors are handling the projection of lyrics, images, and so forth. In terms of physical placement, these two projectors ended up about two feet from the old ones. We also upgraded from 10-foot to 14-foot screens to make these images larger and, hence, more appealing. The new projectors are aimed roughly 45 degrees off of center. It should also be mentioned that there are actually a total of five projectors in the space—the four Eiki units I’ve already mentioned plus an old projector facing the rear wall behind the congregation. This unit serves as the confidence monitor so that anyone speaking on stage can have visual support.”

When queried about those attributes that made the new Eiki LC-HDT700 projectors the right choice for this particular project, Rob offered the following thoughts: “Obviously, hitting a 14-foot-wide HD image requires serious lumens. As for the LC-HDT700’s ability to handle this, the new projectors were positioned and configured for the space without any real effort. The projectors went up and worked perfectly right from the start. The images are bright and clear and they really take the visual presentations in the room up a notch.”

For many installations, questions about image optimisation and other aspects of projection frequently arise. On this subject, Rob offered his experience with Eiki’s customer and technical support services.

As always, Steve Rubery at Eiki was the ‘go to’ person in both the design and application of this installation. Eiki’s commitment to its customers is impressive as it combines first-rate equipment.

Since the upgraded system’s debut on Easter, services at Cypress Lake United Methodist Church have been more visually appealing than ever.

Rob concluded by sharing some of the remarks he has encountered: “The transition from XL-200 projectors to the new HDT-700 could not have been easier and everyone at the church has been very complimentary of the new projection capabilities. The lyrics and related visuals are larger and more visually appealing than before and the environmental projection along the back wall has also been very well received. The combination of their new and existing Eiki projectors has definitely taken the entire visual presence in the sanctuary up to a new level. It’s been a very rewarding experience.”